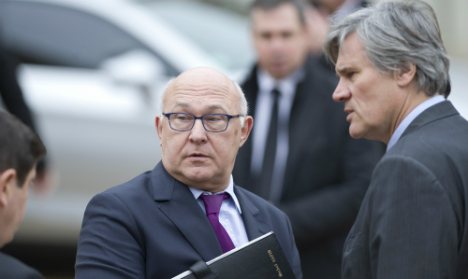 During a press conference in Dublin, Michel Sapin welcomed the move and said it correctly recognised there were difficulties in the stagnating European economy.

"Currently the European Commission does not have sufficient information to immediately issue new recommendations so the commission has decided to give itself some time and I think this is welcome," he said.

Earlier in the day in Brussels, the European Commission postponed its verdict on the budgets of France, Italy and Belgium until March.

"I think it is the right way for the commission to recognise there is a difficulty," Sapin said.

But Sapin is confident Paris will convince the EU on its fiscal direction by March.

Sapin recently announced efforts to shave a further €3.6 billion ($4.5 billion) off his country's deficit on top of a €21 billion cost-cutting plan but Paris will still miss European Union deficit targets.

"What I said will be done so I have absolutely no concern when it comes to the European Commission judgement," he added.

France has come under fire for failing to hit its deficit targets despite severe austerity in some of its EU peers.

"France does not want to change the rules, we wish for the rules to be applied intelligently using the flexibility contained within the rules and France — and I'm saying this here in Ireland — does not want to have different treatments depending on the size of the country."

Sapin was in Dublin to meet Irish finance minister Michael Noonan to discuss lower growth and low inflation in the eurozone.