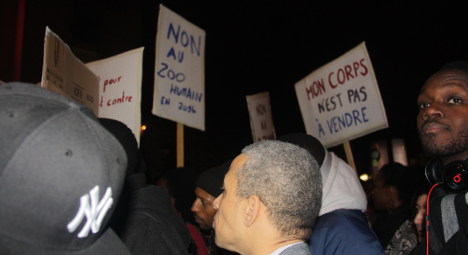 "No to human zoos" and "My body is not for sale", were just two of banners held up by protesters at Exhibit B show in Paris. Photo: Gilda Di Carli

Angry demonstrators gathered on Thursday night outside the Gérard Philippe theatre in Paris’s Saint Denis, a district with a high non-white population, in a bid to block an exhibition on the horrors of colonialism using live black actors.

Journalist Gilda Di Carli who was covering the event for The Local said: "At about 6:40pm things started getting lively as protesters, who numbered around 100 started arguing with police officers.

"Then the metal barrier was pushed over and everyone, protesters and journalists included, rushed up the stairs toward the entrance of the theatre.

"The police were lined up in front of the doors and there was a lot of shouting and chanting. The police were blowing their whistles as protesters chanted slogans such as "No to racism" and "Cancel the show".

It took Paris police five minutes to break up the what theatre directors described as a “riot”, by which stage protesters had smashed one of the building's window panes and knocked over several barriers.

The controversial work, created by white South African artist Brett Bailey, is supposed to be a thought-provoking look at the 19th-and 20th-century practice of exhibiting people from the colonies in human zoos for public amusement.

Bailey insists “Exhibit B” aims to improve awareness of the racism of Europe’s colonial past, while challenging viewers to question their role as voyeurs in contemporary human tragedies (one of the “tableaux” features a modern-day asylum seeker bound to an aeroplane seat with gaffer tape).

Writing on his Facebook page last night a defiant Bailey said: "Protesters at the premiere of Exhibit B in St Denis, Paris, smashed through the theatre doors tonight. Set off fire alarms. Trying to stop us.

The artist recently told AFP the sudden anger over the installation was a grave misunderstanding from people who had not actually seen the "deeply emotional" work.

But not everyone agrees.

A petition, mirroring a successful appeal for the same art show to be banned from London’s famed Barbican theatre, has already been signed by more than 14,000 Parisians.

“It is already surprising that in the mixed districts of northern Paris, the multi-ethnic population is being invited to come and learn about the racism of a white South African,” reads the appeal.

“It is all the more shocking that the possibilities for black artists to present their work in these prestigious cultural centres are extremely limited,” it added.

France's black community rights group CRAN said it was not calling for the exhibition to be stopped but said that while “it might be well-intentioned it reinforces stereotypes”.

“It shows black people as passive and as victims,” CRAN president Louis-Georges Tin told The Local. “It never shows the struggle by black people for their own emancipation.”

"There were objections to the fact that a white South African is telling a story about racism," Bailey told AFP.

The exhibition toured Europe in 2013 and received a "beautiful response" he added.

In France, Exhibit B has received support from the League of Human Rights, Paris mayor Anne Hidalgo and Culture Minister Fleur Pellerin. The show is scheduled to continue at the theatre until November 30 before moving to the 104 theatre between December 6 and 15.