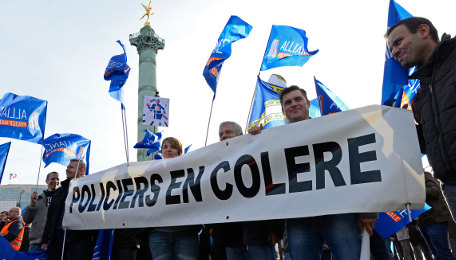 Police officers protest in Paris as the number of suicides this years tops 50. Photo: AFP

On November 24th a young policewoman based near Paris was sitting in a friend’s garden when she took out her service weapon and turned it on herself.

Just days earlier in Bastia, on the island of Corsica, a young police captain took her own life when she grabbed a colleagues gun and shot herself.

These incidents were not isolated.

On Friday a tweet from a police union announced that a policeman in the north of France had shot himself at home to become the 50th officer to take his own life since the start of the year. That compares to 40 last year and 43 in 2011 and 2012, with another month still to come.

France’s police union leaders say officers are suffering from what the French call a “ras-le-bol”, a fatigue or malaise, that basically means they’ve had enough.

The country’s Interior Minister Bernard Cazeneuve is under pressure to act and he has called for measures to be introduced in early 2015 to prevent police suicides.

David-Olivier Reverdy from the police union Alliance told The Local on Thursday that there was now real crisis in the police force.

While he accepts there are always “multiple factors” behind suicides, he says the fact remains that there are fundamental problems with the French police force that is pushing many over the edge.

“Some of these suicides are clearly down to problems in their personal lives, but there is clearly a malaise among police officers,” he said.

Reverdy points to “archaic” management systems, working conditions, pressure from bosses, and a lack of protection from the government given the fact that “no one these days seems to be too scared to physically attack police officers”.

Reverdy blasts reforms by the Ministry of Justice Christiane Taubira that has seen community service punishments handed out for certain offences rather than prison offences – a reform aimed at easing the pressure on France’s creaking prisons which are home to a record number of inmates.

“The French people understand our problems, they support the police but at the same time, in places like Marseille, they are shooting at us, with the blessing of the Ministry of Justice,” Reverdy says.

France as a country suffers from one of the highest suicide rates in Europe but a recent study concluded that police officers in the country had a 36 percent higher chance of taking of their own life than the ordinary population.

The root of the problem according to Reverdy is that police chiefs are asking already overworked officers “to do more for less”.

One officer named Paula who called a French radio station after she herself had attempted to commit suicide simply blamed: “harassment from management” for the crisis.

“We are there to help people, but no one is there to help us. We see children killed, fatal road accidents, suicides, but we can't go home and talk to our families about our day at work," she said.

Police also complain of being stigmatized by elements of the general public. A problem not helped by high profile incidents such as the death of Remi Fraisse, who was killed by a police stun grenade during clashes at an anti-dam protest, or a shocking incident of a Canadian tourist raped at a Paris police HQ. For the second consecutive year, police officers took to the streets earlier this month to protest in a bid to send a wake-up call to the government. Except the number of officers marching had doubled since 2013 – a sign the malaise is spreading.

The head of the UNSA Police Union Philippe Capon, one of the leaders of the march, also blamed the policy of “setting targets” for the jump in suicide rates as well as an “intensification in the job”.

To make matters worse for the officers, showing any kind of signs of depression is considered to be a weakness, Capon explained, adding that it's "almost impossible" for them to seek professional help within the force.

"We need to open negotiations with the unions for a fresh start, so we can avoid psychological risks for the officers, and so we can offer perspective for their colleagues," he said.

Interior Minister Bernard Cazeneuve will be under pressure to find a remedy for the malaise when he meets police union chiefs in January.

“He needs to give us the means and give us back the motivation to work, which we have lost,” said Alliance's Reverdy. “And basically stop favouring criminals above us and the victims of crime.”