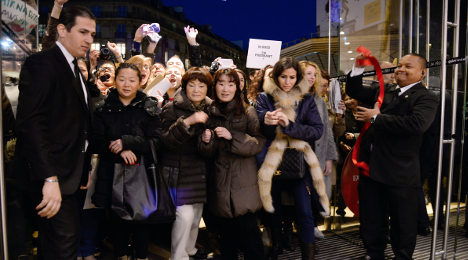 Shoppers in France are more likely to stick to the usual sales for bargain hunts rather than go crazy for Black Friday. Photo: AFP

It’s seen by many as the ultimate symbol of American consumerist excess – ravenous shoppers fresh from expressing their gratitude for the simple things in life, leave their families at home and rush off to buy a new TV or the latest Apple products.

But while it has made tentative steps in France, the phenomenon is still yet to really take off in a country which sticks rigidly to set sales periods – notably the summer and the New Year.

A glance at the French press on Friday gives an insight to how far France has to go before we’ll see scenes of shoppers literally fighting each other to get their hands on Black Friday bargains, as was seen in London this week.

“Explain Black Friday to us”, was a headline in France Info whereas the French version of Huffington Post went with: “Black Friday 2014: What is it?”

The newspaper Liberation perhaps best summed up the suspicion in France towards the arrival of a consumer craze from across the Pond.

“Black Friday, will it send the French crazy?” was the headline with the writer concluding that France wasn’t quite there yet despite the growing publicity around the phenomenon in recent years.

But while the press were busy trying to explain what it was, stores in France were not so hesitant and for the third or fourth year in a row tried to tempt shoppers with unbeatable Black Friday offers.

Big brands such as Casino, Fnac, Darty and Habitat were all taking part.

"Black Friday Habitat: 20 percent off the collection and 40 percent off a selection of items from November 28th to 30th",  read the text message sent out by the upmarket furniture store.

"We had a difficult year for consumers. We need to liven it up a little, notably with Black Friday. Christmas is a time when the notion of pleasure is important," Darty's marketing chief Christian Lou told Le Figaro.

But if the shops and stores are up for it, is there the same enthusiasm among French shoppers?

"Black Friday is a typical American institution. It’s hard to import it because it is not in the collective memory of the French," says Rudolph Bonasse, a distribution specialist from CA Com.

“For us, the sales are traditionally after Christmas and Black Friday seems like a totally artificial way to reverse the logic. It’s not succeeded,” he said.

For Bonasse, Black Friday could become popular, but it “will take a lot more time” and will need all the big stores to jump on board “to create a massive event like in the United States”.