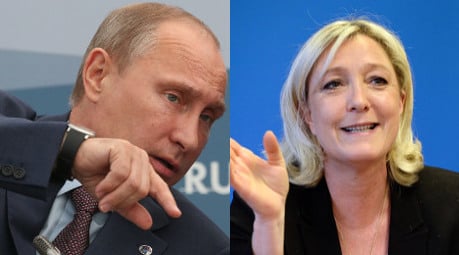 Whether or not Putin's attempts to meddle in French politics were the reason behind a €9 million loan to the National Front, it has to be forbidden, a lawmaker tells The Local. Photo:AFP

While the National Front's Marine Le Pen insisted there was nothing sinister in the loan from a bank with close ties to the Kremlin, many suspected the credit was motivated by an attempt by Russian president Vladimir Putin to influence French politics by backing a party known for its pro-Moscow stance.

The move has prompted French Socialist Party deputy Razzy Hammadi to propose a bill to make it illegal for political parties in France to obtain funds from certain foreign countries.

In his bill Hammadi proposes banning political parties from taking loans from banks in countries who have not signed up to transparency agreements with France, of which Russia is one of them.

Hammadi described the loan to the National Front as “shocking, unacceptable" adding that "it cannot be without consequences from a legal point of view.”

“We have to prevent French political parties from being able to borrow money from outside the eurozone,” Hammadi told The Local on Thursday.

“It’s the first time we are faced with this situation. It’s not possible,” he said.

“How can a party represented in the National Assembly approach debates about foreign policy and strategy from a neutral standpoint, if it is financed by foreign banks?”

In France article L52-8 forbids all financial help from abroad, whether a foreign state or business to any candidates in French elections, but it doesn’t ban parties seeking funds abroad that they can then use to boost its election chances.

When it comes to suggestions that the Kremlin has sanctioned the loan as a way of boosting a pro-Russian political party in France, Hammadi believes that even if it’s innocent, there’s still an obstacle to transparency.

“I don’t know if there’s something more sinister behind this loan, involving Vladimir Putin and the Kremlin, but if we permit this kind of financing then we will always have doubt and we cannot have any kind of doubt in the country’s parliament.”

“It’s so dangerous because the loan can be structured in order to get something in return. The interest rates or dates for repayment and conditions of paying it back can all be considered as a gift and they cannot be suspected of influencing the national interest,” Hammadi said.

“This method of financing must be tackled and forbidden, for all political parties. Imagine what Marine Le Pen would say if the Socialist Party took out a huge loan from Qatar,” Hammadi added.

He also proposed that the French state should end tax breaks for political parties who seek financing abroad.

For its part, the National Front has claimed it has no money because French banks refuse to issue loans to the far-right party.

Le Pen and others in the party have reacted angrily at the outcry surrounding the loan and insisted that it’s completely transparent. Suggestions the Kremlin were dappling in French politics were dismissed as “fantasy” by party leaders.

Vice-president of the party Florian Philippot has hit back by demanding a law that forces French banks to offer loans to the country’s political parties.

Hammadi however dismissed this claim.

“I don’t believe it. How have they managed to survive for the last 40 years if French banks won’t give them money,” he said.

Further revelations on Thursday from news site Mediapart suggested the National Front had actually requested €40 million from the First Czech-Russian bank and €9million is only the first payment.

Hammadi will be hoping his bill gets the backing of lawmakers before any more money heads to France from Moscow.