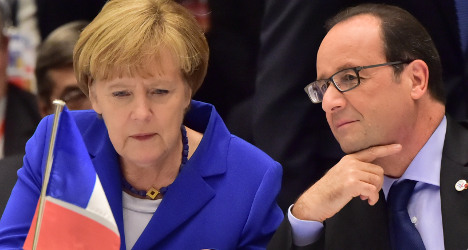 "In France we fear lack of boldness for decisive reforms. In Germany we fear complacency," said the report, drawn up by two leading economists for the French and German governments.

In a hotly awaited set of proposals to jumpstart the traditional Franco-German motor that drives the European economy, Henrik Enderlein and Jean Pisani-Ferry concluded: "France and Germany spend a lot of time on joint declarations and initiatives. We miss action."

For Germany with its ageing population, the priority should be on getting more women into work and bolstering public-sector investment to foster growth, the economists suggested.

While the report is not official, it was commissioned by Paris and Berlin and is expected to receive close attention from economic policymakers in both capitals.

The two countries have frequently been at loggerheads over economic policy, with Berlin believing Paris urgently needs to tackle its ballooning budget deficit and open up its labour market and France saying Germany is overly insistent on austerity.

"We think the German government can and should increase public investment," wrote the economists.

"Such reforms are not meant to please the respective neighbour, or anybody else, but to create better domestic conditions for jobs, long-term growth, and well-being in each country and in Europe."

The two economists painted a dire picture of the European economy, beset by sluggish economic growth and high unemployment.

"Europe is falling into a stagnation trap: growth is barely noticeable, current inflation is dangerously low," they wrote.

There is even a "fear of another lost decade setting in," the economists warned, adding: "Europe is losing relevance internally and externally."

The report called for an end to what it calls "pointless" sniping between the two countries over who is to blame for Europe's economic malaise.

"The truth is that Europe suffers from multiple ills," it said.

The economists urged the two countries to unite for the good of the continent.

"We are approaching a tipping point. The economic, social and political dangers that Europe is facing are a threat to all. Division would hurt everyone," they wrote.

"It is the common responsibility of Berlin and Paris to prevent it from happening," the added.

The plan, seen as the cornerstone of Juncker's mandate, involves the EU setting up a pot of €21 billion in a bid to pull in 15 times that in private funding.

Pisani-Ferry and Enderlein however called for "an additional €30 billion by individual member states and national development banks."

Separately, French President Francois Hollande told an environmental conference in Paris that "we will no doubt have to go further in implementing this plan … we will have to put even more resources in."