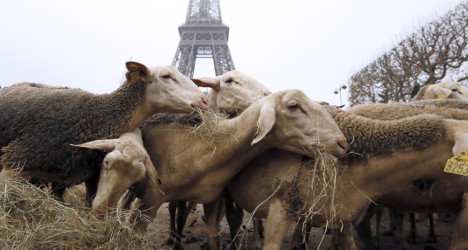 Sheep graze under the Eiffel Tower, as their shepherds protest against wolf attacks. Photo: Patrick Kovarick/AFP

Sheep lazily grazed at the foot of the French capital's most famous monument as the farmers gathered under grey skies to demand an effective plan to stop the wolf attacks.

In a statement titled “Stop the massacre!” one union representing sheep farmers (ONF) said: “Given the extent of wolf attacks in recent weeks, and the suffering and deep confusion of sheep farmers, plus the obvious inefficiency of the measures taken against wolves, and the inaction of the powers that be against the incessant attacks by the predators, our union has decided to organise a protest.”

Claude Font, a sheep farmer at the protest told The Local that the livelihoods of farmers were more important than protecting a wild animal.

"I know people who have abandoned their occupations because their flocks were destroyed by wolves. Every morning they would wake up and find the animals had been massacred. Psychologically they couldn't take it.

"There's 8,000 attacks a year now and the numbers are rising and 29 different departments have been hit. The wolves are gaining territory," he added.

Font, from the ONF union slammed the government's attempts to deal with the crisis as "completely ineffective" and said protesters were demanding the protected status of wolves be revoked.

"The government needs to protect our livelihoods," he said.

The farmers were not alone: animal rights activists calling for the protection of wolves also made an appearance under the Eiffel Tower.

The protesters are due to meet Agriculture Minister Stephane Le Foll later in the day, and the sheep are expected to accompany them to the ministry.

"There is nothing natural about being eaten by wolves. We are against wolves from the moment they attack our farms," Claude Font, head of a sheep farmers' organisation from the central region of Auvergne, said ahead of the protest.

French farmers have grown increasingly angry over the rise in wolf populations.

The animals were hunted almost to extinction in France in the 1930s, but crossed back into the country from Italy in the 1990s. They are now protected and number around 300.

Plans to introduce a group of wild bears into mountains on the edge of the French Pyrenees also raised ire earlier this year.

France's Environment Minister Segolene Royal stepped into the row in June, saying that attacks by wolves had become too frequent.

"The damage to herders has become too great," she said in a statement. The distress of the farmers and their families should be better taken into account," she said.

Claire, a sheep farmer from Drome in the southeast, said the constant threat of wolf attacks was "an enormous daily stress… it is omnipresent and oppressive, farmers around me feel helpless."

"Those who wanted to overprotect them are going to kick themselves. The wolf reproduces and moves around very fast, she added.