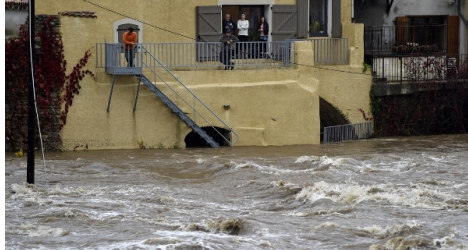 The south of France is set to be hit by more rough weather. Photo:AFP

France’s meteorological service Météo France issued warnings for storms, rainfall, and floods for a dozen regions in the south of France that will remain in place until Saturday morning.

The departments Pyrénées-Atlantiques, Hautes-Pyrénées, Haute-Garonne and Ariège are on alert for strong winds while Aveyron, Ardèche, Gard, Hérault, Lozère, Tarn and the two Corsican departments face the risk of flooding due to heavy rainfall. The Var department is also on alert for potential floods.

Météo France expects that up to 240 mm of rain will fall in the Languedoc region, and up to 150 mm over the Cévennes in the Ardèche department, in just 24 hours.

Météo France also urges caution in areas where the grounds are already completely saturated with water due to the recent heavy rainfall.

Winds may reach up to 110 km/h in the Pyrénées-Atlantiques, Hautes-Pyrénées, Haute-Garonne and Ariège departments.

The warnings are just the latest to be handed out for southern France, which has been frequently battered by extreme weather throughout the autumn.

Earlier this month, heavy storms and rainfalls wreaked havoc in parts of the region.

The Ardèche department was hit especially hard after river banks burst and flooded the area and some 6,000 homes were left without power. Firefighters were called out to deal with almost 100 incidents.

“We have an enormous amount of damage, with walls collapsing onto roads,” said deputy mayor of an Ardèche village Michel Aymard at the time.

“We’ve only just received the financial aid from the government for damage caused by flooding in 2013,” he said.