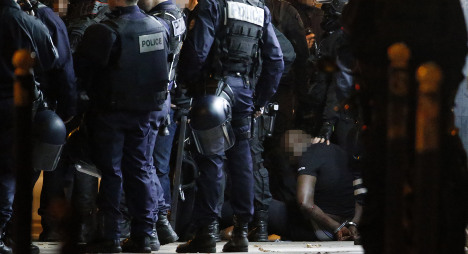 One of the alleged men who tried to rob a Cartier store sits handcuffed surrounded by police. Photo: Kenzo Tribouillard

The suspects agreed to release the hostage and turn themselves in, with the entire drama lasting about two hours. Police recovered a cache of jewels the men had stolen.

One witness inside the Cartier store located in a busy touristic area said the two men, who did not seem "professional", burst in late in the day and forced the three customers inside and about ten staff to lie down.

They then demanded that the store's showcases be opened, but were interrupted as they gathered jewellery by the sound of police sirens.

The suspects fled with the store manager. A witness told AFP he saw one of them dressed in a trench coat and a beret, with a towel on one hand and holding the hostage with the other.

"Everyone tried to hide," said the witness, who gave his name as Vincent and had been at a nearby restaurant's terrace.

The two men dropped their hostage and fled aboard a scooter while shooting into the air, but later fell and ran away on foot before entering the hair salon.

The salon manager was the only person inside and was taken hostage. Around 100 police were mobilised with the support of a helicopter.

"A negotiator was able to quickly enter into contact with them," Paris prosecutor Francois Molins said.

"They agreed somewhat quickly to free the hostage safe and sound, and they turned themselves in."

Besides the AK-47, they also had a 9mm pistol. Their stolen jewellery was recovered inside the hair salon.

"There was lots of money and jewellery that had been well-chosen," the prosecutor said.

A police officer was lightly wounded by a bullet fragment, while one of the suspects was injured in the scooter fall. 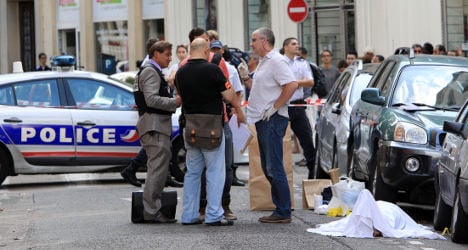