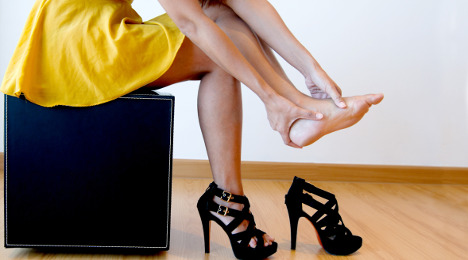 In the study, Guéguen observed the responses of 90 male participants between the ages of 25 and 50 who had been randomly selected on the street in Brittany, France.

A 19-year-old female participant asked them to complete a survey — once in flat shoes measuring 0.5 cm, once wearing shoes whose heel height measured 5 cm and once again wearing high heels that measured 9 cm.

The results indicate that people's responsiveness doubled between the lowest and highest heel heights.

He also tested people's empathy, observing how approximately 180 men and 180 women responded when four young women of the same height, weight and shoe size dropped a glove on three occasions distinguishable by the height of the heels they wore.

They wore similar clothing of the same color, according to the study, and they each dropped the glove wearing three different pairs of shoes in the same height categories as in the above experiment.

The female participants didn't respond differently according to the heel height of the women who dropped a glove, but men's readiness to help augmented by one third from the flat shoes to the 9cm shoes.

Lastly, Guéguen observed 36 men aged between 20 and 58 in a bar and found them quicker to start chatting up a woman wearing heels.

In fact, they began talking to the sole female confederate who helped to conduct this experiment when she was wearing high heels within seven minutes, whereas it took them 13 minutes to approach her while she was wearing flats.

Possible explanations for the findings include the change in gait brought about by high heels or the demure appearance of the foot when wearing such shoes, says Guéguen.

He also feels that because so many models are depicted wearing high heels men have mistakenly come to associate them with sexual intent.

The study was published in Springer's journal Archives of Sexual Behavior.