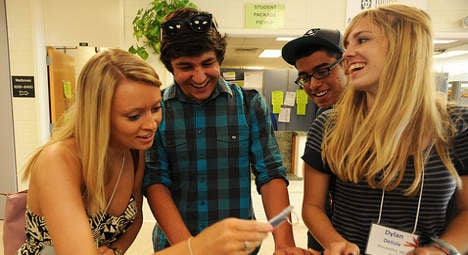 International students are worth a lot of money to France. Photo:Tulane Public Relations/Flickr

International students in France, particularly in Paris, often curse the cost of living, but they can console themselves with the fact they are worth hundreds of millions of euros to the country’s beleaguered economy.

According to a new survey carried out by the agency BVA on behalf of Campus France, the organisation whose job it is to try to attract young people from abroad, international students cost the French state €3 billion a year but on the upside they bring in €4.65 billion.

The study doesn’t specify how much those incomings are down to money shelled out in the student bars across Paris, but it does show that being an international student in France is not cheap.

When it comes to spends, a foreign student shells out on average €11,000 a year on costs such as food and rent and then there’s the extra cost, pointed out by the study, of having to buy flights home for the holidays.

Foreign students also earn money for French state coffers through tourism, when their families and friends come over to visit.

The state also benefits from the fact that 41 percent of international students work, therefore contribute to health and pension insurance funds, yet rarely benefit from them.

SEE ALSO: How to live on a student budget in Paris Then there’s the fact 85 percent of those students return to France at some point for tourism reasons. That can in part be put down to the fact that international students are seven times more likely to end up with a positive image of France than a negative one.

According to Campus France there are now around 300,000 international students in France and those numbers have risen 11 percent over the last five years.

Most of them come from wealthy families living in countries where average wages are average or low. Of the 300,000 international students in France, some 43 percent are from Africa, 26 percent from Europe, 19 percent from Asia and 8 percent from the Middle East.

Unsurprisingly the highest concentration of those students are in Paris (28 percent) where an array of universities and a decent nightlife are the main pull for young people from abroad.

That’s followed by the south east, which is home to university towns like Grenoble – voted the best place to be a student in France last year.

The study also showed that nearly three out of four students are enrolled at French universities, where as those enrolled at business and engineering schools.