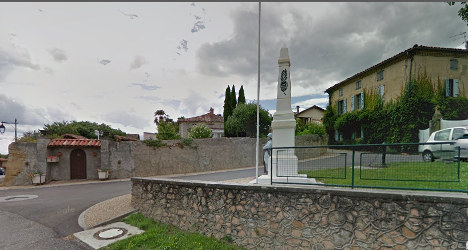 The village of Fabas where the couple lived. Photo: Google Streetview

A 98-year-old Briton and his British wife, 86, were found shot dead in their home in southwest France in what police suspect might have been a murder-suicide by the couple.

Their house cleaner found the bodies early on Monday, with the wife dead from two gunshots and the husband killed by a single wound to the head, a police source told AFP.

The pair were named by local media as Derek and Sheila Hawkins.

The mayor of the village of Fabas, Simon Bavard, told The Local that Derek Hawkins had "left behind several letters for his children that were to be opened after his death."

"I also know that he had made arrangements for his funeral," he said.

Police found a .22-calibre handgun which belonged to the husband at the couple's house on the outskirts of Fabas, to where they had moved 30 years ago to breed Dachshunds.

An autopsy scheduled for Wednesday in nearby Toulouse could confirm investigators' hypothesis that the husband killed his wife and then turned the gun on himself.

There were no signs in the house that a struggle had taken place.

The paper said Derek Hawkins had recently told his physiotherapist that he was “morally fatigued” and that if “if I go, it won’t be on my own”.

"They had no enemies, they never caused any trouble" in the village of around 300 people, said the mayor, who said he was "shocked" at the news of the deaths.

“They were a couple who were passionate about dog-breeding’” he said. Initial reports said the husband was an American, but the mayor said he believed both were British.

The deaths in Fabas come just days after an 84-year-old man entered the hospital ward of his 82-year-old terminally ill wife in a Paris suburb and shot her dead before turning the gun on himself.