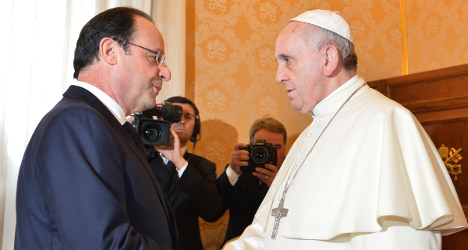 François Hollande with Pope Francis in the Vatican earlier this year. Photo: AFP

Pope Francis headed to Strasbourg on Tuesday for a lightning visit to the European Parliament, where he hopes to help reinvigorate a "tired" Europe, hit by economic crises and surging nationalism.

Francis left his pope-mobile behind and – unusually for the crowd-loving Argentine – dedicate his time to addressing lawmakers and the Council of Europe in a four-hour trip, the shortest abroad by any pope.

In what will be the second visit by a pope to the parliament in the French city of Strasbourg, Francis will also meet briefly with outgoing European Council President Herman Van Rompuy and new European Commission chief Jean-Claude Juncker.

The climate has changed greatly since the last papal visit to the French city in 1988, and Vatican watchers say the Argentine pontiff will have to fight harder to be heard in an increasingly secular continent.

Crowds of faithful are expected to watch the speeches on giant screens set up in front of the city's cathedral. For protocol reasons the head of the Catholic Church will be driven between the parliament and council buildings rather than walking, the Vatican said ahead of the trip.

The 77-year old has in the past dubbed Europe a "tired" continent which has lost its way, and he may repeat such warnings amid a rise in radicalisation, particularly among the disillusioned younger generation.

He is expected to call for greater tolerance, social inclusion and dialogue as a recourse to an increase in racism in countries hit hard by the economic crisis, where nationalist, Eurosceptic and anti-immigration parties are thriving.

His visit has sparked protests in some quarters — including from a bare-breasted Femen rights group demonstrator who mounted the altar in Strasbourg cathedral on Monday.

The self-dubbed 'sextremist' protester had the words "the pope is not a politician" painted on her back.

Femen caused a fair amount of uproar last week when they pretended to have kidnapped a priest in protest at the pope's visit.

The group then tweeted out a provocative picture of a man dressed as a priest in the arms of a bare-chested member of Femen, saying he "had renounced his vows".

France's notorious far-left firebrand Jean-Luc Mélenchon said the pope's visit was "an attack on the principles of secularism" in France.

"Mr Pope, your place in the parliament’s gallery is not acceptable as part of a formal session of our assembly," said M"lenchon.

Schultz defended the invitation in an editorial for the Vatican Osservatore Romano newspaper this weekend, saying the visit could "shake Europe out of its torpor" and was by no means "an attack on secularism.

The pope's right-hand man, Vatican Prime Minister Pietro Parolin, said Francis's message would have a strong social dimension, calling on Catholics to make their "own contribution" to the European project, while showing "solidarity with the marginalised."

The leader of the world's 1.2 billion Roman Catholics will likely call for more to be done to tackle youth unemployment — which stands at an average 21.6 percent in the continent — and to care for those fleeing war zones and persecution, as well as the elderly.

Many, particularly in the Church's conservative arm, will be watching closely to see whether Francis will address hot-button topics such as gay marriage, abortion and euthanasia — particularly after a slew of recent legislative changes in European countries.