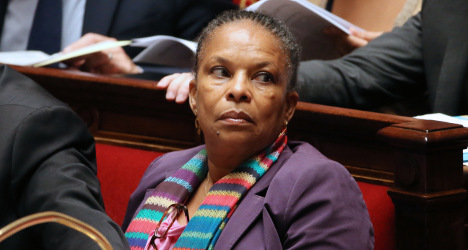 "Kill them before they grow", the minister tweeted, citing Marley who sang the phrase in his 1973 hit song "I shot the sheriff".

Taubira's tweet came as riots erupted in the suburb of Ferguson outside St Louis after a grand jury chose not to press charges against a white officer who shot dead black teen Michael Brown in what he said was self-defence.

The grand jury decision further fuelled racial tensions in the United States after Cleveland police shot dead 12-year-old Tamir Rice, who was waving around what turned out to be a toy gun on a playground.

An unarmed Martin was killed in 2012 by a neighbourhood watch volunteer during what he described as an altercation at night in the street.

Taubira later explained to France Info radio that she had wanted to express solidarity "in an extremely painful situation."

"I am not making a value judgement on United States institutions (but) when the feeling of frustration is so strong, so deep, so lasting and massive, you have to ask yourself about the trust in these institutions," said the minister.

"One realises this only happens to the same people, African-American kids. So there is the problem of a certain number of cliches, portrayals, prejudices which can create terrible reflexes." 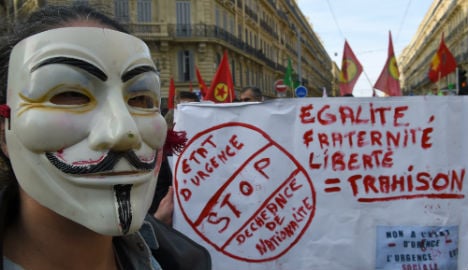 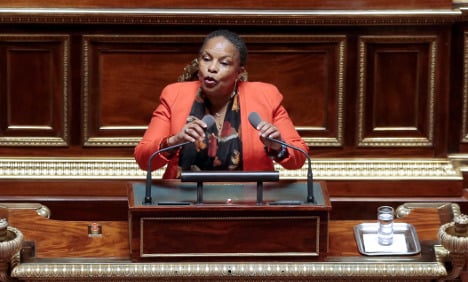 A protester in Paris next to a banner calling for an end to the state of emergency. Photo: Boris Horvat / AFP
Braving driving rain and shouting slogans including “state of emergency — police state” the marchers protested loudly against a measure they see as curbing human rights.
Police put participation at 5,000 while organisers said some 20,000 people took part.
Protesters took to the streets in more than a dozen other cities including Toulouse and Bordeaux in the south in  marches organised by unions, human rights organisations and other pressure groups.
Rights groups also reject a government plan to strip convicted French-born terrorists of their citizenship if they have a second nationality.
That proposal has already triggered the resignation of Justice Minister Christiane Taubira who stood down in protest over the plan this week after the constitutional reforms were presented to parliament.
Parliament is due in the coming days to debate the state of emergency as President Francois Hollande seeks parliamentary approval to extend the current three-month measure, which expires on February 26.
The Senate is to vote on the proposal on February 9, followed by a vote in the National Assembly on February 16.
Concern has been growing about the state of emergency, introduced after coordinated gun and bomb attacks left 130 dead in Paris on November 13.
France's highest administrative court on Wednesday refused to lift the state of emergency.
The Council of State ruled that the “imminent danger justifying the state of emergency has not disappeared, given the ongoing terrorist threat and the risk of attacks.”
But UN human rights experts last week said the measures placed what they saw as “excessive and disproportionate” restrictions on key rights.
Saturday's protesters demanded an end to the state of emergency and the nationality proposal, measures they say “strike at our freedom in the name of hypothetical security.”
Marchers said they fear an open-ended state of emergency.
“Until when? The end of Daesh (Islamic State)? Ten years? Never?” asked one woman, who gave her name as Chris, while another, Camille, said she feared that France is “experiencing a permanent coup d'etat.”
Despite the popular concern, a recent poll showed 70 percent of French people back maintaining the state of emergency.
SHOW COMMENTS 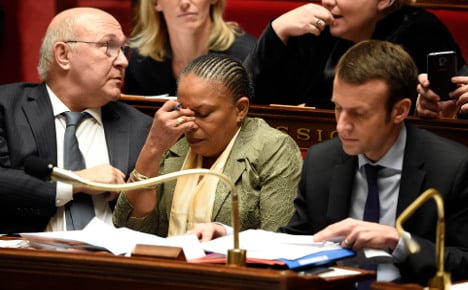 TAUBIRA
Christiane Taubira: Loved or really loathed by the French 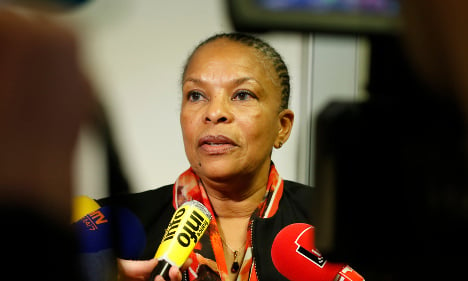