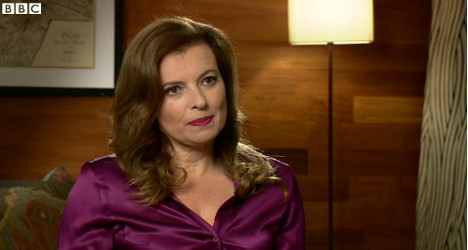 Valérie Trierweiler in an interview with the BBC. Photo: Screengrab: BBC

Some 10,000 copies of the English version of Trierweiler's book 'Merci pour ce moment' (Thank you for the moment) have been pre-ordered online, showing that people on the other side of the English Channel also want to know what she has to say about France’s most unpopular president yet.

After details about Hollande’s affair with actress Julie Gayet were revealed in January, he publicly dumped Trierweiler in an 18-word statement, that she called “a betrayal, and on top of that, a public humiliation” in an interview with The Guardian.

Although often portrayed as the bitter and vengeful ex, Trierweiler insists she didn’t write the book to get even with Hollande.

“It's not revenge. It was not my objective to destroy François Hollande. It was about me rebuilding myself,” she told The BBC in an interview on the Andrew Marr show.

"The book is not a settling of scores. It's almost a love story."

While she doesn’t portray her former partner in a positive light in the book, claiming he mocked her for her humble origins and secretly called the poor “toothless”, she remembers why she fell in love with him in the first place.

“He made me laugh. His intelligence and sharp mind amazed me. He made me feel I was the only person in the world,” she told The Telegraph.

When the two met, Hollande was with Sélogène Royal, the current ecology minister, and Trierweiler was married to Denis Trierweiler, the editor of Paris Match where she worked at the time.

“The two of us fell in love when we were not free. I had a husband I loved, and three young children,” she said. Trierweiler denies she was a hypocrite, saying her husband knew of her affair with Hollande from the start.

She resisted Hollande's advances for a while, she said, but after their first kiss there was no turning back with Hollande giving her “that once-in-a-lifetime passion that devours everything”.

She explained she didn’t regret her relationship with him, only the fact that it ended so coldly and so abruptly.

After the revelation of his affair, she took a bunch of sleeping pills though she claims it wasn’t a suicide attempt.

“It was an attempt to escape. What I wanted was not to have to live the next few hours. It wasn’t that I no longer wanted to live,” she said.

Another moment she remembers as particularly painful was Hollande telling a French radio station that his behaviour surrounding his affair with Gayet had not caused anyone any embarrassment.

“I do not think he realised how much damage his interview caused me. I was stricken just as on the darkest day of our separation. He plunged the blade in deeper still. Bitterness and anger made the wound fester,” said Trierweiler.

Trierweiler has been criticized for her book by the press and public for degrading the presidency and spilling details that should be kept private.

When confronted with the comment of a writer of The Guardian who called the book a disservice to women, Trierweiler said:

“These people want to say that the dignified woman is the woman who shuts up.

“Is that how we serve the cause of women? I don’t think so. Is it OK to be mistreated by a man without saying anything? No.”

When asked about whether she felt like a pariah in France Trierweiler hit back saying: "People stop me in the street to say something nice, something like 'we misjudged you'. They know why I was unhappy during that year."

In terms of the damage the book has done to Hollande himself, she told the BBC: "I just hope it will help him see the mistakes he has made."

Despite her anger she says Hollande is no worse than any other politician who aims for the top.

"They don't become president unless they are self-centred or sometimes a little economical with the truth. The majority of them are like this. Hollande doesn't have more faults than any others," she told the BBC.

She may have been put down by the media but it seems Hollande isn’t holding a grudge against Trierweiler for speaking out publicly.

She told Italian newspaper La Repubblica he came to see her a few days ago saying he wasn’t mad about the book and wanted to reassure her Julie Gayet would never move into the Elysée Palace.

“Obviously, the lie was with us until the end,” she said.