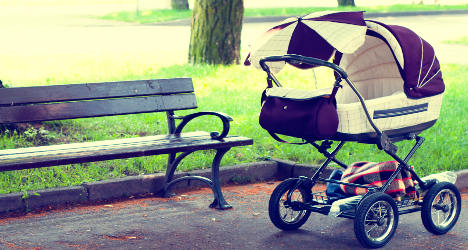 Paris has been hit by a wave of pram thefts. Pram photo: Shutterstock/Antos777

In October, police arrested a couple and their 15-year-old daughter on suspicion of having stolen more than 40 prams near a school in Paris’s 15th arrondissement during the month of September alone.

And during the past 12 months, police suspect the trio of making off with up to 330 prams, which were then sold second-hand on websites such as Le Bon Coin. And they don’t seem to be the only ones zooming in on the pushchairs.

“For the past two years we have encountered a massive amount of parents who have become victims (of such thefts). To the point, actually, that we have begun selling special pram padlocks,” Sylvie Attali, a store manager for baby equipment shop La Do Ré in Paris, told French daily Le Figaro.

Nathalie, who runs a baby gear shop in central Paris, told The Local that she regularly hears accounts from distraught parents who've had their stroller stolen.

"It happens all the time. Often it's when the family lives a few floors up in their building and has left the pram in the hallway downstairs. In some cases the prams have been locked, but the thieves manage to steal them anyway."

One new Paris mum told The Local, the first thing she did after buying the pram was to buy a lock.

"Just like with bikes, prams get stolen all the time in Paris. I have to lock it up every time we go to the child health centre (PMI) and parents are told to do the same. It's the same at nurseries, where prams go missing all the time," said Beatrice H.

Although French police do not have any specific statistics for the missing pushchairs – which can cost parents anything from €200 to €1,500 when bought new, and which normally fetch at least half of that when they’re later sold online – they are aware of the spike in thefts.

The problem is exacerbated because stressed out and preoccupied parents become easy prey and the strollers are difficult to trace.

“A pram isn’t like a car, with a registration number that you can track down,” a police source told Le Figaro.

Having a pushchair stolen can have steep consequences for the parents.

“If you have a baby it’s difficult to lead your daily life without it,” Attali said. “A theft like that can be very handicapping.”