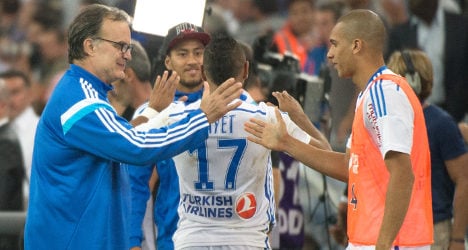 Andre-Pierre Gignac steered home an 85th minute header to help under-fire Marseille to a 3-1 victory over Bordeaux and keep Marcelo Bielsa's side top of Ligue 1 on Sunday.

The come-from-behind win lifts Marseille one point ahead of Paris Saint-Germain while Bordeaux remain fourth but now seven points adrift.

Gignac's clinical strike was his 11th goal of the season and lifts him joint top of the scoring charts with Lyon's Alexandre Lacazette.

Michy Batshuayi wrapped up the scoring in the final minute after Mario Lamina had cancelled out Thomas Toure's opener for Bordeaux.

"It was a tough match right to the end but it's a positive result for us and a great evening," said Marseille's French international Dimitri Payet who set up the equaliser.

"I was able to recover and get some rest during the international break which helped me to work on other aspects of my game. I'm just happy my work has paid off."

The game took a turn for the worse for the home side when Marseille defender Benjamin Mendy was left with egg on his face in the 55th minute as his defensive howler led to Bordeaux's goal.

The 20-year-old defender tried to dribble his way out of trouble before playing the ball straight to the feet of Bordeaux's Nicolas Maurice-Belay who was in perfect position to attack.

The former Monaco winger raced at the outnumbered Marseille defence before laying the ball to the wide open Toure who had the simple task of placing the ball past Steve Mandanda.

The lead was short-lived as a fine cross five minutes later from Payet on the right flank was met by Lamina and his firm header left Bordeaux 'keeper Cedric Carrasso rooted to his line.

It was the 21-year-old Gabonese-born midfielder's first goal in Ligue 1.

Then came Gignac's moment of magic and his first goal in three games to ignite the victory.

Earlier this week, Gignac inadvertently found himself at the centre of controversy when it was revealed his transfer from Toulouse to Marseille in 2010 was being investigated as part of a fraud probe.

Around 15 club officials, including president Vincent Labrune and two former presidents, were arrested.

Sources close to the investigation said gangland figures were suspected of receiving commission from several major transfers, including that of Gignac and Senegalese international Souleymane Diawara.

In the weekend curtain raiser on Friday, champions PSG defeated Metz 3-2 as star forward Zlatan Ibrahimovic made his first start in two months and temporarily lifted the champions top of the league for the first time this season.

Argentines Javier Pastore and Ezequiel Lavezzi scored either side of a Gaetan Bussman own goal for the visitors, who remain unbeaten this season.

A pair of Modibo Maiga penalties had briefly brought Metz level early in the second half after turning around 2-0 down at the break, but they couldn't hold out.

In earlier matches on Sunday, fifth-placed Nantes maintained their one point advantage in the standings over Saint-Etienne as the two teams battled to a 0-0 stalemate at La Beaujoire stadium in Brittany.

Elsewhere, 2012 champions Montpellier eased four points above the relegation zone with a 2-0 victory over Toulouse.

Former Lyon and Nice midfielder Anthony Mounier was quickest to pounce on a loose ball in the box after 37 minutes and beat Ali Ahamada in the away goal and put Montpellier 1-0 in front.

Senegal striker Souleymane Camara then made sure of the points with three minutes remaining with an angled shot that again Ahamada failed to keep out.

On Saturday, Lyon extended their unbeaten Ligue 1 streak to ten matches with a hard-fought 0-0 draw at Bastia while Monaco failed to make up ground on the front-runners when they were held 2-2 at home by Caen.