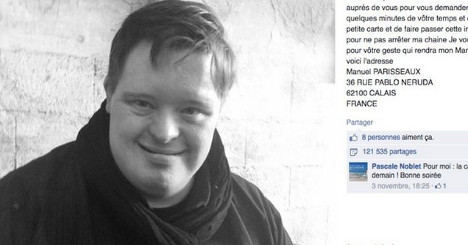 Manuel Parisseaux was sent an incredible 30,000 birthday cards from all around the world, thanks to his mother. Photo: Screengrab from Facebook

By the time Manuel Parisseaux's birthday rolled around on Saturday so many letters had arrived his family in Calais in northern France had to store them in a neighbour's garage.

"I don't understand why it got so big. Manuel is like us, he is moved to tears," his mother Jacqueline Parisseaux, 61, told AFP.

It all started November 3rd, when the mother, a childcare worker, says she told her husband: "We are going all out to celebrate" Manuel's birthday this year.

So Jacqueline Parisseaux and her husband posted the following message on her husband's Facebook page, hoping a few people would take notice:

"My son Manuel is going to turn 30 years old on November 22nd. He has Down's syndrome. I'm writing to ask you to take a couple minutes to send him a little card and to pass this information on to your friends so the chain doesn't get broken.

"I thank you all for your gesture, which will make my Manu so happy."

The cards came by the dozens at first, but then hundreds began to arrive from around the world. Soon the letter carrier couldn't deliver all the cards and they began to come by truck.

"It snowballed immediately," the mother said. "We had a few hassles with Facebook because our post was shared 120,000 times and they thought we were a business or that we were running a scam."

The response was global.    "We got cards from everywhere: Sri Lanka, Chicago, Hong Kong and sometimes with child's drawings," the mother said, holding back tears.

On Saturday the rush of 3,000 cards that arrived pushed the total to 30,000 and included boxes of chocolate, key chains and even cakes.

The family was trying to sort through all the cards and have promised to keep every one them, "but not respond to all of them," she said, smiling.