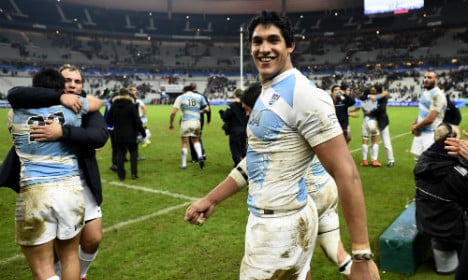 The Pumas scored four drop goals and dominated the majority of a turgid contest to end their November tour on a high.

France came within inches of snatching a potentially match-winning try deep into added time, but South African-born full-back Scott Spedding was held up over the line.

Had they scored that, and converted it to snatch an unlikely victory, it would have been hard on an enterprising Argentina that dominated in almost every aspect of the game and aligned an almost impenetrable light-blue and white wall in front of France's runners.

It was their first win in France since the 2007 World Cup, and richly deserved.

"We're very happy, we played a spectacular match. We're a young team that gives everything and we gave everything we had," said Pumas full-back Joaquin Tuculet.

"It's a great pleasure, we played badly against Scotland but now we have to be happy with this win."

The hosts may have come into the clash brimming with confidence following wins over Fiji (40-15) and Australia (29-26) but they were given a tactical lesson in the first half.

France coach Philippe Saint-Andre said his side lost the match in the first half hour, at the end of which they trailed 15-0.

"We weren't surprised by Argentina's performance, during the week we told the players that they (Argentina) have the level of a southern hemisphere side," he said.

"The only thing was that we were totally absent in the first half hour. We were dominated at the breakdown and in terms of dynamism."