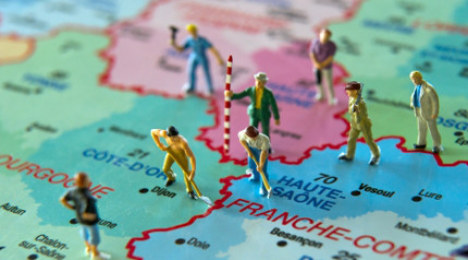 France is to get a new map, but what is the point of it all? Photo: Philippe Huguen/AFP

After a six-hour over night discussion this week, the National Assembly adopted the text proposing to reduce the regions in Metropolitan France from 22 to 13.

It will be done, not by axing several regions, but by merging some of the existing ones together by 2016. The text will be put to a formal vote on the 25th of November.

Those in support of the plan claim reducing the number of regions will simplify bureaucratic measures, save money, and make life easier for both businesses and residents.

The new map of France will look like the one below if the text is formally adopted, with the red coloured regions showing where two or even three will be united. While the plan might seem like common sense to many it has been met with a fair bit of resistance, not least in the fiercely proud Alsace region.

Deputies in Alsace, which will merge with the Lorraine and Champagne-Ardenne regions according to the new map, were particularly vocal against the proposal.

"In what kind of society can you marry people against their will," said Jean-Luc Reitzer this week.

Thousands of Alsaciens joined street protests to voice their anger over the reform, some carrying banners saying "We won't mix choucroute with quiche", referring to the two local dishes from Alsace and Lorraine.

When the map was drafted, Strasbourg mayor Roland Ries made it clear he would not accept it if Strasbourg, the seat of the European parliament, lost its status as regional capital when merged with other regions.

He got his way on Friday morning much to the anger of deputies from Champagne-Ardenne.

On Wednesday deputies of the UMP argued that the proposed region would be too large, namely nearly the size of Belgium, and that the merge would negatively affect the economy and hurt Alsatian identity.

But after all the hullabaloo, what purpose will France's regions serve anyway apart from provoking furious parliamentary debates and will the reform change anything?

We asked expert Gérard Marcou, a professor from Paris Université 1 and a specialist on the question of regions.

“France’s regions do have powers,” says Marcou. “For example, they are in charge of building and managing the country’s high schools (lycees), they also have responsibility for regional transport, as well as environmental planning, for example developing Green energy.

“They also have responsibility over tourism in the region, such as the regional natural parks as well as economic development," he said.

Regions can levy their own taxes and receive a portion of this revenue back from central government, that forms part of their overall budget.

On the other side however regions lack legislative authority so cannot write their own laws.

'We should completely redraw everything'

When it comes to the redrawing of the map Marcou believes all the fuss was just a distraction by Hollande to divert the attention of MPs and other elected officials away from his attempts to reform the economy.

Plus, Marcou says, the chances of the reform saving any money is slim as it "won't have much of an impact".

"If we really wanted to redraw the boundaries according to economic and demographic criterion that are rational and functional we would not merge existing regions, we’d have to completely re-do everything.

"The real issue is towns and communes," he said.

“We have had the same municipal map since the 18th century. Napoleon managed to eliminate the villages with fewer than 300 inhabitants, we went from 44,000 to 38,000.

“He’s the only one who has managed to get rid of small towns. The place where we could really save some money is by concentrating these small towns.”