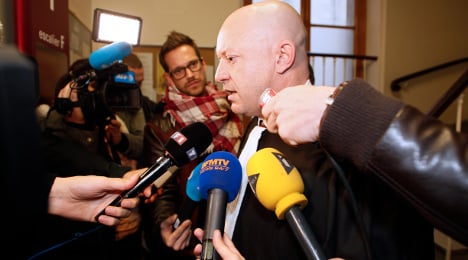 The other three individuals were named by sources as businessman Michel Moulin, Franck Toutoundjian, the president of amateur side AS Ararat Issy-les-Moulineaux and Caen's security chief Kaddour Mokkedel.

Meanwhile, in a separate development, Marseille president Vincent Labrune and around 15 club officials detained since Tuesday as part of a transfer fraud probe, were released without charge.

As police later quizzed more staff from the Ligue 1 leaders, the lawyer of Fortin was proclaiming his client's innocence.

Fortin is accused of corruption as investigators scrutinize a series of matches, notably a 1-1 draw between Caen and Nimes on May 13th that saw the former promoted to Ligue 1 and the latter escape relegation to the third tier.

Recordings of telephone conversations between leading figures of several clubs form a key part of the evidence.

Magistrates have been trying to establish if pressure was exerted by Nimes on other Ligue 2 teams as the club battled against relegation.

Following 48 hours in custody Fortin was charged after appearing before examining magistrates along with Kasparian, Conrad, and Moulin, described as 'an intermediary'.

Fortin's lawyer, François Gery, insisted, however: "My client has shown his complete innocence of the facts that he is accused of in this case."

All six men charged were released on bail on condition that they do not contact one another.

Dijon coach Olivier Dall'Oglio was released without charge on Wednesday evening, as was Kasparian's son.

The Canard Enchaine weekly on Wednesday released a transcript of a telephone conversation between Fortin and Conrad which it said was made by police.

In the recording, Fortin says: "You need a point as well?"

Conrad replied "Yes, we need a point too, there it is." The Caen president then says: "Well, if we are not too stupid?"

The weekly said that 24 boxes of wine, 288 bottles, were left outside the Caen dressing room after the game.

Meanwhile, down on the south coast the spectacular raids which led to the mass arrests on Tuesday of high-ranking Marseille officials have so far led to no charges being brought.

Police are looking into various transfers, including that of key striker Andre-Pierre Gignac from Toulouse to Marseille in 2010.

A police source told AFP that Marseille appeared to be "more of a victim" in the scandal that has embarrassed the famous French side as they lead holders Paris Saint-Germain in the title race.

Suspicions of extortion, money-laundering, fraud and conspiracy with underworld gangs are being investigated.

Sources close to the investigation said gangland figures were suspected of receiving commission from several major transfers, including that of French World Cup player Gignac and Senegalese international Souleymane Diawara.

Diawara joined in 2009 from Bordeaux and left this year for Nice.

Diouf, who stood down as club president in 2009, emerged from custody to tell a press conference: "I've got absolutely nothing to blame myself for.

"My interviewers were more put out than I was."