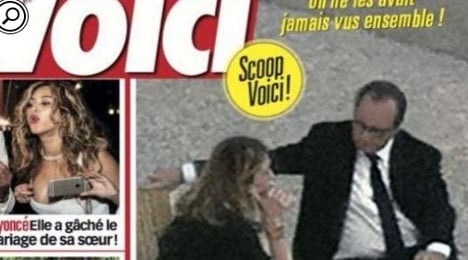 Hollande and Gayet chatting on a terrace of the Elysée Palace. Photo: Voici

French magazine Voici published a photo spread on Friday featuring the “first images” of François Hollande and actress Julie Gayet, inside the Elysée Palace under the title "Images of a couple in love".

The publication of the photos have raised security fears at the palace as it is unclear how they were taken and offer more evidence that the French president’s private life is no longer considered off-limits for the country's media.

Hollande was left furious in January this year, when another gossip mag Closer published an exposé that revealed Hollande had been having a secret affair with Gayet behind the back of his then partner Valérie Trierweiler.

After Hollande unceremoniously dumped Trierweiler rumours have been rife in Paris that he has continued his fling with Gayet. But after calling for his private life to be respected, the pair managed to keep their romance out of the public eye.

Until Friday that is.

The president is unlikely to be pleased by Voici’s decision to plaster an image of him with Gayet chatting on a terrace, over its front cover on Friday with the headline: “The First Photos” adding: “Since the beginning of their liaison we’ve never seen them together”.

The magazine writes: "Seated on the terrace of the presidential apartments, the couple enjoy a tender moment of complicity as they often do behind the walls of the Elysée".

The photos, dating from October, were then seized upon by the more mainstream French press.

According to the magazine’s editor Marion Alombert, Gayet has been a regular at the Elysée Palace in recent months has practically become the “quasi-official first lady”.

According to Alombert: “The actress spends most her nights and weekends” at the palace with Hollande and feels “a little like she’s at home”.

“The employees are used to passing her almost everyday,” she said, adding that Gayet is at the Elysée “to support him”.

The latest snaps have raised questions about security measures at the palace. Alombert confirmed that Hollande is "someone who sometimes has holes in his security".

Questions were also raised about Hollande's security after Closer's initial exposé showed images of him zipping around on a scooter with only one security guard.

She told French TV station BFM that the three published photos of the couple were "not taken from inside" the palace "nor by a drone".

"They were taken from above but not at all by a drone — we absolutely don't use this kind of method," she said, also dismissing the use of a helicopter.

She did not, however, reveal how the pictures were taken.  "It is part of the trust that photographers put in us when they offer these kinds of photos," said Voici's Alombert.

The magazine also details the rigmarole that Gayet must go through every night as she visits Hollande at the Elysée.

Travelling in an unmarked car she has to be driven around the streets surrounding the palace a few times "making several turns and detours, before entering through the backdoor that leads to the presidential apartments".

It also says that while Gayet used to make sure she had left the palace before 7am every morning, she now feels more relaxed and often relaxes in the palace until around 10am.

This will all make uncomfortable reading for Hollande's former partner Trierweiler, who is about to do a series of interviews in the UK, to promote her tell-all memoir of her time at the Elysée, which is to be released in English.