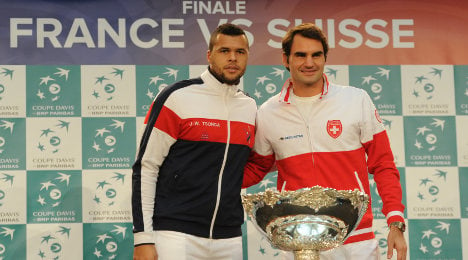 Roger Federer leads the Swiss quest to win a first Davis Cup title in Lille on Friday, taking on a powerful French quartet spearheaded by Jo-Wilfried Tsonga and Gael Monfils.

The 33-year-old tennis superstar will be playing in his first Davis Cup final and as a partner will have long-time accomplice Stan Wawrinka.

Australian Open champion Wawrinka gets proceedings underway against Tsonga with Federer then taking on Monfils in what promises to be a blockbuster of a match for the capacity 27,000 crowd.

The buildup to the final has been dominated by the fallout from last Saturday's gruelling clash in London between Federer and Wawrinka in the last four of the ATP Tour finals.

By the end of an extraordinary match Wawrinka was left "destroyed" after letting slip four match points, Federer had hurt his back, and they had endured an ugly spat over some inappropriate words from Federer's watching wife Mirka.

The two have since buried the hatchet over the Mirka incident, but Federer admits that he will take an element of uncertainty into his opening rubber Friday against Gael Monfils due to his back injury.

Wawrinka, however, said that he is full of confidence despite his loss on the London hardcourt.

"For sure, it was tough to lose against Roger with four match points. But I took a lot of positive from that week. I'm feeling great from London, a lot of confidence from there. Playing really good tennis," he said.

"I've had five days here to change surface, to play on clay. I did what I could here with some good practice. I'm feeling ready for the weekend.

"It's going to be a long weekend. Doesn't matter what, you have to be ready for three days. I think I am. Physically I'm feeling fit. It's great that Roger can play tomorrow.

In contrast the French — seeking a 10th all-time Davis Cup win and a first since 2001 — have been quietly preparing on clay well out of the spotlight down in Bordeaux. None of their players qualified for the Tour finals in London.

Captain Arnaud Clement believes that team spirit, camaraderie and home crowd support could be the keys to victory.

"They are all very close," he said of his team. "All the players are very close, the four players around me, and even Gilles (Simon), who is not here."

The two other members of the French team — Julien Benneteau and Richard Gasquet — have been selected to play in Saturday's doubles against the Swiss pairing of Marco Chiudinelli and Michael Lammer.