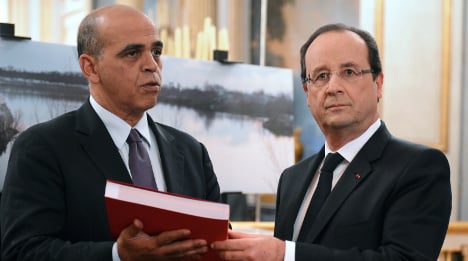 Kader Arif, a junior minister for veteran affairs, became the latest member of Hollande's government to step down under a cloud of suspicion in what has been a year of political and personal calamities for the most unpopular French president in modern history.

An investigation was launched in September in the south-western city of Toulouse into whether two event management companies run by Arif's brother and nephew benefited from favouritism in the awarding of public contracts worth millions of euros.

Arif "handed in his resignation in order to provide all the details necessary to establish the truth in the preliminary investigation by financial prosecutors in which he is implicated," the presidency said in a statement.

His resignation comes just over two months after trade minister Thomas Thevenoud was sacked for tax irregularities only two weeks after being appointed in a shock cabinet reshuffle following a party rebellion.

That resignation had uncomfortable echoes of the so-called Cahuzac affair, when Hollande's budget minister Jerome Cahuzac was sacked in March 2013 for evading taxes through non-declared Swiss bank accounts.

Far-right leader Marine Le Pen was quick to jump on the latest scandal. Her National Front party has made significant gains by focusing on the chaotic state of mainstream politics.

"Every month brings a resignation or sacking," she said, adding there was a need to "reflect on the human quality, the ethics, of those in power".

Hollande has been hit with blow after blow, unable to shake off an approval rating that stands at a historic low as unemployment figures grow ever more dismal and growth flatlines.

His year has also featured the cringeworthy exposure of an affair with an actress, Julie Gayet, and the public implosion of his relationship with a journalist, Valerie Trierweiler.

The celebrity-focused magazine Voici published the first photos of Hollande with his actress lover Gayet since news of their secret liaison broke in January, raising concerns over security at the Elysée presidential palace where they were snapped.

Adding to Hollande's woes, Trierweiler is set to break her silence on a explosive kiss-and-tell book she wrote about their relationship with a promotional tour in Britain.