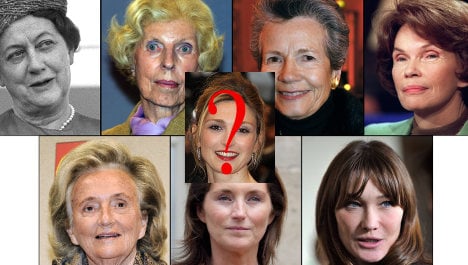 Julie Gayet's fling with François Hollande continues to make headlines in France and not just in gossip mags, but have the country's "first ladies" always been the focus of so much attention?

With years of colourful history to draw on, we take a closer look at how Gayet's recent predecessors fared in the role:

Yvonne de Gaulle: Her famed discretion earned her the affectionate nickname “Tante Yvonne” (Auntie Yvonne). She met Charles de Gaulle in 1920, an encounter that had been secretly arranged by her family. Two days after their first evening together she announced to her relatives that she would either marry him or no one. The first thing the practising Catholic asked for once installed in the Elysée Palace with her president husband was a pietà, a work of art depicting the Virgin Mary. She reportedly also refused to receive divorced people in the palace.

Claude Pompidou:  She met Georges Pompidou while she was studying law in Paris. When her husband was named Prime Minister she refused to move into the official residence at the Hôtel Matignon, saying she preferred the freedom of living in their own apartment.

In the late 60s, she and her husband were wrapped up in the scandal surrounding the murder of Alain Delon's bodyguard, Stefan Markovic. It was rumoured Markovic blackmailed people with incriminating pictures. Shortly after that revelation, supposedly inappropriate pictures of Claude Pompidou surfaced. All of this seemed to have been part of a scheme to sabotage her husband's career.

The wife of Valéry Giscard D'Estaing, this particular first lady arrived on the French political scene after the dawn of the Kennedy politics of the 1660s. Her husband, mindful of the effect a 'potiche' (trophy wife) could have on his electability, missed no opportunity to parade his wife to the French people in publicity shoots for magazines. Madame Giscard D'Estaing was initially sceptical of this role- although her match in beauty, she was no Jackie Kennedy- however, she dutifully took it upon herself to support her husband. As a result, she was one of the first ladies to play a visible role in French politics – even if it wasn't entirely her choice. If this particular first lady didn't enjoy 'playing' at politics, her successors soon would…

As the wife to one of France's most infamous presidents, François Mitterand, Danielle Mitterand would have to have a strong character to survive the wave of extramarital affairs which became public knowledge after the president's death in 1996. A background as a resistance fighter in the Second World War would certainly make any wife a force to be reckoned with. As first lady and as a politician in her own right, she stood up for the causes she believed in, including human rights, and gained a reputation as a forthright speaker on the world stage; indeed, she counted Fidel Castro among her close friends. Madame Mitterand had her own political life, and many have suggested her own extra-maritial life, but she never publicly reproached her husband; in fact, she even consoled his secret illegitimate daughter out of 'instinct' at her husband's funeral. Unlike more recent glitzy first ladies, Madame Mitterand enjoyed simple hobbies and even became an accomplished bookbinder.

Jacques Chirac's wife met the future president at Sciences-Po when the two were undergraduates. Unlike her husband, she was of aristocratic stock and her  family was in fact honoured by Napoleon III in the 19th century. Bernadette Chirac was so enraged by her husband's affairs and the rumours of a Japanese love child that she loudly claimed to have been taken for a 'conne' in front of French TV cameras. However, Chirac always made herself useful to her husband; she remarked earlier this year that current first ladies should 'make themselves useful somehow'. She also suggested it would be better 'for everyone' if the president were married. Whether happily or not, she declined to specify.

Cecilia Ciganer-Albeniz was Sarko's wife during his first year in office in 2007, but only months later she had been replaced by part-Italian singer-songwriter, former model Carla Bruni after a brief affair.

These two women are throwbacks to the glamour period of the Sarkozy presidency. With Sarkozy styling himself as France's saviour, Carla Bruni is set to become the centre of media attention yet again. As the face of jewellery maker Bulgari and with an album that earned her more than a million euros, Bruni is a rare example of a first lady who has equalled her husband's share of the limelight. Bruni famously cost the French taxpayer over three times more than Trierweiler:  Bruni's upkeep came at a price of €60,000 a month. Ironically, she is now being billed as the solution to Sarkozy 'bling' image, because of her natural, girl-next-door image.

Trierweiler is the most recent presidential partner – before she was of course unceremoniously dropped by Hollande, who took up with Julie Gayet in a moped facilitated split which rocked the French presidency. Trierweiler is a journalist who has just written her kiss-and-tell memoirs of her relationship with Hollande. Highlights include statements that Hollande actually finds poor people repulsive and privately calls them 'toothless'. Trierweiler once remarked that she wanted to 'represent the image of France'; now she would probably remark that you should be careful what you wish for.

And next in line is Julie Gayet it seems. Here's 10 things you need to know about the actress.