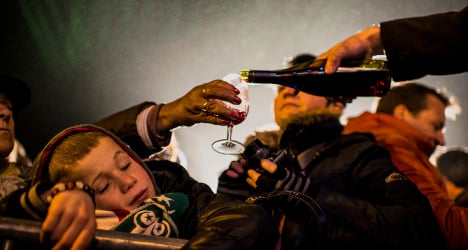 Eager crowds gathered Wednesday outside the church in the eastern French town of Beaujeu ahead of midnight when at the cry of "The Beaujolais Nouveau has arrived!" France's first wine of the year was unleashed.

With a bash of the mallet on a barrel, the weeks-old wine gushed into glasses and smiles spread across the faces of the happy crowd of wine fans, some from afar afield as China, Russia and Brazil.

The annual tradition where winemakers in Beaujolais country rush "primeur" wine to market, often with only a few days of fermentation to its name, has become a worldwide sensation as taste for the like-it-or-loathe-it wine has spread.

"A little acidic," said Daniel as he took his first sip, sporting a straw hat with "Beaujolais" emblazoned across the front.

The 60-something Frenchman makes the pilgrimage from the eastern town of Jura every year with his friends to take part in the long-standing event. "We know it's not the best on offer but above all we come for the atmosphere," he said.

Eight hours earlier, in a restaurant in the centre of Tokyo, crowds decked in red scarves and hats held their own rather different countdown to the 2014 vintage: "Three, two, one…kanpai!" meaning cheers in Japanese.

At a resort spa in Hakone, west of Tokyo, some 60 people really took the plunge, celebrating the arrival of the new wine by swimming in a huge tub of specially prepared dark red water as "Miss Bourgogne" poured in full bottles.

This year is the eighth time the arrival of Beaujolais has been celebrated at the resort, where about nine litres (2.4 gallons) of wine was emptied into water already containing special wine-based bath salts.

The annual festival welcoming France's first wine of the year has now taken its place on the calendar of restaurants around the world.

Merchant George Duboeuf, who started the Beaujolais Nouveau event in 1967, this year feted the arrival of the new wine by holding a soiree with his son Franck.

In China, expatriates and locals took their first sips of the 2014 vintage accompanied by France's other famous delicacy, cheese, made by a young Chinese who studied in France.

Some French producers also took advantage of the time difference to enjoy their own early celebrations.

"We will celebrate the Beaujolais Nouveau on Skype with our Japanese clients," said 30-year-old Claire Chasselay, whose family exports some 40 percent of the wine they produce at Chatillon d'Azergues in the south of the region.

For them the celebration is a big boost to business: "Our Japanese clients know us thanks to Beaujolais Nouveau. Now they buy our line throughout the year."

But while the party has become a worldwide tradition, predicting the popularity of this year's vintage is a lot harder.

"There are 2,000 producers in Beaujolais, all small operations, who all make their wine differently," said Chasselay.

In the days when it was mass produced with little care for the quality, Beaujolais was derisively known as the banana-flavoured wine.

"(Banana) is an aroma that can be found naturally in wine," said Melina Condy, another producer. "But for Beaujolais, it was due to a yeast that was added that had a secondary effect on the taste. It is no longer used."

Now the wine is instead known for its light and fruity flavour, but even those depend on the winemaker.

Fabien Chasselay, the family's vinologist, said they produce two different types of wine, a younger one emphasising the fruity flavours, and another with more tannins and depth that takes longer to make.

"The Beaujolais nouveau is a very rude wine — very young and spirited," he said.