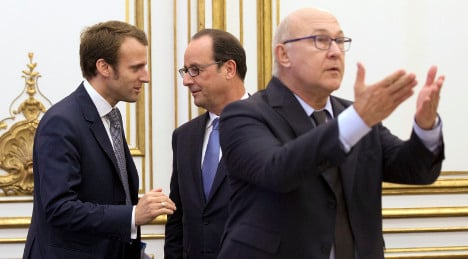 Michel Sapin (right) says the UK will be weaker if it leaves the EU. Photo: AFP

Sapin said he accepted that “the British will be British” but urged the UK not to walk out on Europe.

In answer to a question from The Local at a meeting with Anglo journalists in Paris, Sapin said: “If the UK forfeits its place in the EU, then Europe would be weakened and the UK would also be worse off. It has to stay in.

“But the British will be British, just like the French will be French”.

Sapin’s warning for Cameron comes in the same week that France's economy minister Emmanuel Macron also told Britain that “its fate lies within the EU”.

That same line has also been pushed by President François Hollande in recent months, although in contrast to its politicians a recent survey suggested the French people couldn’t care less if the British left the EU.

One factor that has added to the anti-EU sentiment in recent weeks and left Cameron and co shaking their fists in anger was the budget bill sent from Brussels to London asking the UK to cough up a further €2.1 billion.

Sapin, a staunch ally of François Hollande, pointed out however that the UK's loss is France's gain, even if it was due to the sorry state of the French economy.

“It just so happens that what is sending Mr Cameron into a fury is actually a gain for us. It enables us to get one billion euros,” Sapin told journalists at the Paris meeting on Thursday.

The €2.1 billion bill sent from Brussels to Britain gave extra ammunition to the eurosceptics in Cameron’s Conservative Party, who want Britain to pull out of the EU.

Speaking to the Anglo-American Press Association Sapin also broached the subject of French-bashing from across the English Channel.

The Minister said that what hurts more is the unfair criticism of France coming from the French themselves.

“It also happens that we do a little bit of Brit-bashing here too, but what I really don’t like is French-bashing by the French themselves. They are often the hardest on France.

“I sometimes see more positive judgments on France coming from abroad rather than within France.”

The minister, who along with Macron has the job of trying to kickstart France’s beleaguered economy, accepted that he could not see France’s unemployment crisis being resolved anytime soon.

He said that a major reason why unemployment remains stubbornly high in France is the country's high birth rate and the large proportion of women in the workplace.

"Imagine if in France we had the same demographics as in Germany and the same number of women working, then you would have the same unemployment rate," he said.

The unemployment rate in Germany is 6.7 percent, the lowest level in more than two decades. In France it is above 10 percent.

President François Hollande has said he will not run for a second term unless the jobless rate declines in the remaining two and a half years of his term.