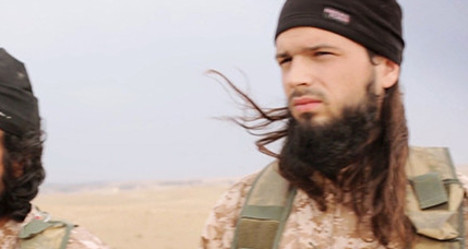 Maxime Hauchard, one of two French nationals who appeared in an Isis beheading video.

The news that two young Frenchmen were among the executioners in the latest IS video this weekend was a reminder that violent extremism can attract people from all sorts of environments.

One was identified as Maxime Hauchard, 22, from a village in Normandy in northern France, seen with a knife to the neck of one of the 18 Syrian prisoners decapitated in the video.

"He was a nice boy who never caused problems," was the response of one neighbour in Bosc-Roger-en-Roumois, Jeannine, who watched Hauchard grow up and play with her grandchildren.

"They must have drugged him," she said.

The other was identified as Mickael Dos Santos, 22, from a small town just south-east of Paris. A goodbye letter written to his parents was published in Le Parisien on Thursday. It read: "It read: “I love you mum. Perhaps I didn’t show that you enough, but I love you very much. And dad too. Thanks for everything that you’ve done for me. I will never forget you.

Then there was Helene, the 17-year-old who fled her Parisian life to live "under Sharia law" in Syria earlier this year against the desperate pleas of her parents.

In her case, the attraction seems to have been an Egyptian boyfriend who encouraged her to convert to an austere version of Islam two years earlier.

Meanwhile, the picture of a smiling, young David Drugeon – the 24-year-old killed by a US drone in Syria this month –is hard to square with reports that he was a senior bomb-maker for the Khorasan group, an Al-Qaeda offshoot planning attacks in the West.

Intelligence agencies have long since given up on trying to outline a single profile for those who join the jihad. Studies find a wide mix of poor and wealthy, damaged family backgrounds and well-adjusted citizens — the only constant being the young ages involved.

She recently co-authored a report examining the backgrounds of 160 families who had contacted the centre seeking help with a child's radicalisation.

It found 80 percent of parents declared themselves atheist. Two-thirds were middle class. Almost all their children — 91 percent — were indoctrinated via the Internet, with some 63 percent aged between 15 and 21.

Jihadists have "refined their indoctrination techniques… to the point where they can tailor their message to completely different young people," the report said.

The authors outlined five myths used to convince people that joining the jihad is a good idea.

There is the image of the "heroic horseman" which works best for boys, or the "humanitarian cause" that has particular traction among young girls.

Some targets are offered the leadership and structure they lacked growing up, while others are looking for a real-life version of the combat experienced in video games like "Call of Duty".

Lastly, there are those simply attracted to the thrill, danger and sense of power.

According to figures published this week by the Le Monde newspaper, converts to Islam are over-represented. Of 376 French currently in Syria and Iraq, 23 percent were raised in non-Muslim families, the paper said.

That reflects the fact that religion often plays only a superficial role in attracting people to the conflict.

"They are chasing a fictional dream, and they often have barely any knowledge of what Islam is," said John Horgan, a psychologist in the Centre for Terrorism Studies at the University of Pennsylvania.

They "are being seduced by powerful language and metaphors … through a tremendous distortion of what Islam really means," he added.

Most "know nothing about the Koran," adds psychiatrist and former CIA agent in Pakistan.

"Religion is very much an accessory. It's an Islamist community, but it could just as easily have been anarchist, or anti-fascist," he told AFP.

It was a point underlined recently when it emerged that would-be jihadists bought the books "Islam for Dummies" and "The Koran for Dummies" over Amazon before leaving Britain last year.

But as young recruits start converting to the cause from their own diverse social groups, spotting a potential jihadist becomes ever harder.

"They recruit around themselves," said Jean-Pierre Filiu, an expert on the Arab world cited by Le Monde. "That means that today there is no longer a typical profile for jihadists."