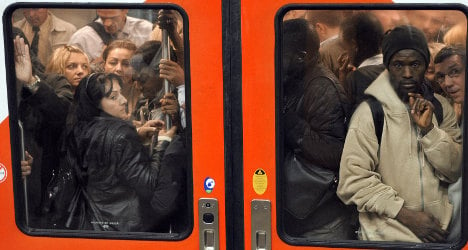 Could music make you feel safer on public transport in France? Photo: AFP

A poll from OpinionWay – Axis Communication revealed that 47 percent of participants feel “often” or “sometimes” unsafe when riding the Metro or taking the bus or the train in France.

The study shows that women, young people, passengers on Paris's  RER commuter trains and people living in the Île-de-France area around the capital feel the most unsafe when using public transport.

Some 49 percent of women indicated to feel scared compared to 44 percent of men.

Shocking incidents such as the one that saw a women being raped in daylight on the RER and another that saw a gang of young robbers storm a train near Paris, have only helped add to the fear of travelling on commuter trains around Paris.

But transport user groups said the figures should be treated with caution.

“We need to view these numbers with care,” Fabrice Michel, spokesperson for the National Federation of Transport Users Association, told newspaper Le Figaro.

“Your feeling of insecurity is not the same when you are travelling late at night in an old poorly lit Metro than when you are in a brand new 'boa' train and you can easily move to avoid an uncomfortable situation."

To counter these fears, that may be somewhat unfounded, Michel wants to create a nicer atmosphere on public transport and suggests improving the "audio and visual comfort of passengers".

To do that he recommends background music and improved lighting and cleanliness.

Michel says that simply installing more security equipment isn’t going to be enough since a lot of the time the feeling of insecurity doesn't come from an actual threat but from the passengers’ thoughts.

"In short we need to pamper the passenger", he said before adding that “putting up stickers with emergency numbers (17 or 112) in vehicles that you can call in case of an assault could, for example, improve the feeling of security."

SEE ALSO: How to avoid the Paris Metro pickpockets The survey showed that young people are more jittery than older people when travelling. Some 56 percent of the 18 to 24-year-olds said they feel uncomfortable on public transit, as opposed to only 37 percent of the over 65-year-olds.

However, the overall percentage of people who are worried when on public transport has gone down by two percent compared to last year when a similar study was carried out.

Those polled say they  feel much more at ease when police, security guards, or conductors are present.

Some 90 percent of those polled would appreciate more video surveillance and 37 percent would even be willing to pay more for their tickets to finance the equipment.

While 45.5 percent of the subjects stated to "have been afraid, at least from time to time, of being assaulted or robbed on public transport" only 3.4 percent actually were victims of assault or theft within the last three years.