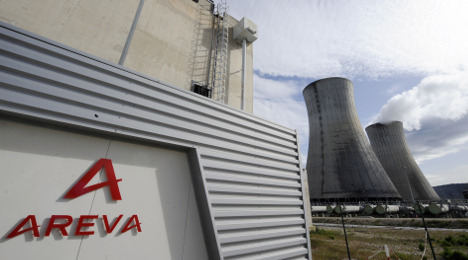 Areva's share price plunged on Wednesday after the struggling French nuclear giant abandoned its financial targets for the next two years.

Trading in the shares of the company – 87-percent owned by the French state – was suspended on Tuesday after leaks, later confirmed by Areva, that it was throwing its financial forecasts out the window.

It said problems with cash flow, the timetable for restarting Japanese reactors, pushed-back plans for building new reactors, and lacklustre conditions in France were behind its decision.

According to the French business magazine Challenges, the government is considering injecting 2.0 billion euros ($2.5 billion) into the company.

It is also mulling the creation of an entity "to park and externalise ultra-losing activities," it said.

Areva's stock, which is at its lowest since June 2012, had been under pressure for several months and has lost half its value since the beginning of the year. It already dropped 20 percent on August 1 when it announced a lower forecast for 2014.

Worldwide, interest in nuclear power has cooled since the March 2011 Fukushima catastrophe in Japan.

In October, Areva said it would cut investments and step up sales of non-strategic assets in a bid to shore up finances.

A general meeting of shareholders is due on December 9.

In addition to financial and operational problems, Areva is overhauling its corporate governance.

The dumping of Areva's forecasts came as energy group EDF confirmed that it would delay until 2017 the launch of a new-generation reactor designed by Areva that is under construction in the northern French town of Flamanville.

Areva said that because of operational delays some client payments could not be expected until next year.

"Areva is undertaking a review of its strategic outlook and mid-term funding plan, which will be examined in the framework of its governance," it said in a statement.

"Areva is suspending its financial outlook for 2015 and 2016," it said, noting delays in work on a new-generation, or EPR, reactor in Finland and in restarting nuclear plants in Japan.