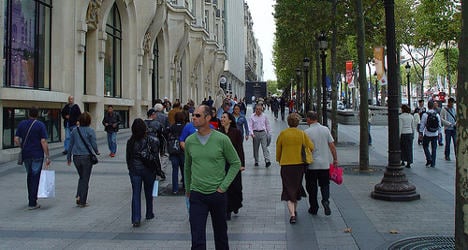 Paris is home to five of Europe's most expensive shopping streets. Photo: Tilemahos/Flickr

It may not come as a surprise to anyone who has ever walked down the famous avenue, but the Champs Elysées has been named Europe's most expensive shopping street.

With an average rent of €13,255 per square meter per year the famed French shopping street beats the likes of Bond Street in London and the Via Monte Napoleone in Milan, where average yearly rent has reached €10,361 per square metre and €8,500 per square metre respectively.

However the Champs Elysées is not the most luxurious shopping street in the world. That honour goes to Fifth Avenue in New York where the average rent price is €29,822 per square metre, followed by Causeway Bay in Hong Kong. The Paris artery comes in third, according to the report by Cushman and Wakefield.

On the Champs-Elysées, the annual rent per square meter hasn’t changed much for the past two years, but not because retailers have lost interest in setting up shop there.

According to Cushman and Wakefield’s general director Christian Dubois demand is still high but space is very limited.

"Rental values remained stable on the Champs-Elysées, but they have increased by 6 percent in a year across the Paris market due to increases in several major arteries of luxury," said Dubois.

But the Champs-Elysées isn’t the only pricy address in the French capital. Four other Parisian shopping streets are listed in the Top 10 most expensive in Europe. The Via Condotti in Rome, Bahnhofstrasse in Zurich, and Oxford Street in London made up the top ten.

Avenue Montaigne in the posh 8th arrondissement sits in fourth place with a yearly rent of €8,500 meters squared.

Tied in fourth place with Avenue Montaigne is Rue du Faubourg St. Honoré, also in the 8th arrondissement, which is also home to the British Embassy and the American ambassador's residence.

The Place Vendôme and Rue de la Paix area in the 1st arrondissement comes in slightly cheaper at €7,364, which leaves it in eighth place.

Again, eighth place is shared with Rue St. Honoré, which is also in the 1st arrondissement.