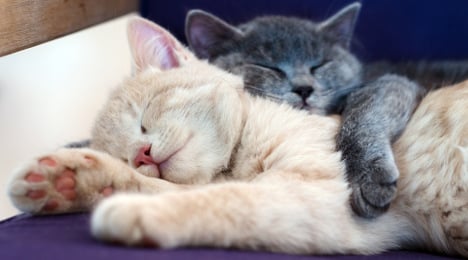 BuzzFeed, the US website that has mastered the art of viral content and is home to articles such as "17 signs you're in love with grilled cheese" and "How well do you remember the Friends Thanksgiving episodes" launched in France around one year ago.

In an interview with Le Figaro Scott Lamb, vice president of international development for the site, revealed that, unlike US readers, the French are not that interested in kitten pictures.

When it comes to what the French do dig, it suggests they are a much more "serious" bunch than their Anglo friends.

BuzzFeed posts on regional pride and local culinary specialities do very well in France, as do posts on Parisian stereotypes.

One article currently on the site lists 24 signs you are from Nantes, while another quizzes readers on whether their behaviour on the Paris Métro is normal.

However, the BuzzFeed articles shared most often by the French – and the site relies on viral posts, getting 75 percent of its traffic from social networks – are those about politics and current affairs.

Lamb said: “At BuzzFeed, we are very proud of all our articles on animals, which do very well in the United States.

"There, users love to show their friends cute and positive things. We have found that's not the case in France. We also noted that the French love sharing news and politics on social networks – in short, pretty serious stuff.”

With 150 million readers a month, love it or loathe it Buzzfeed is an undeniable force on the internet, and is fast becoming one in the world of news. Valued at more than $850 million, the site was started in New York in 2006 and now has international editions in the UK, Australia, Brazil, Germany and India, with launches planned for Japan and Mexico.

The French version of the site still contains mostly translated content from the US and UK sites, but the company is about to expand its team of journalists working on BuzzFeed France and will start adding longform stories to it of the type which have garnered it a growing reputation for reporting.

Lamb says that the site's new focus on harder news will win readers in France, saying that they had a similar reaction against more light-hearted content in other new markets: "We encountered the same scepticism in Germany, where we have just launched. There too the traditional press is well established and much respected. They regarded us cautiously.

"In Australia, we received a mixed reception – some were very excited about our arrival, while others were very hostile. By contrast, we have had no problems in Brazil, where users like to share light content."

He admits the site has been testing the waters in France so far, saying: “We started small to take the temperature of the market and see if BuzzFeed could work in France. Until now, it was more of a “French language” edition, which was equally relevant to Québec and Francophone Africa. We now want to focus on the French public with content specifically created for this country.”

The plans come after Buzzfeed editor Ben Smith received a frosty reception from sceptical journalism students at Paris' prestigious university Sciences Po last year. The site knows what it needs to do to win them over though – more politics, fewer kittens.