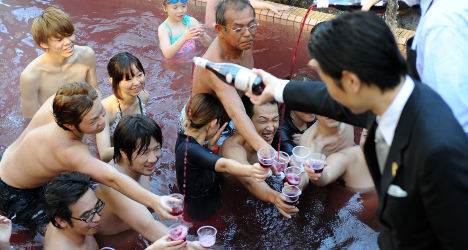 As the clock strikes midnight on Wednesday, corks will pop the world over on new bottles of Beaujolais Nouveau, with oenophiles in Asia getting the first taste of the love-it-or-loathe-it young French wine.

Long an annual tradition, winemakers in Beaujolais country in eastern France rush the "primeur" wine to market just a few weeks after harvest, often with only a few days of fermentation to its name.

The time difference means the Japanese — always keen fans of Beaujolais — will be the first to taste this year's vintage, whose hurried preparation often makes for very mixed reviews.

Some producers in France have even decided to align their clocks with their biggest fans.

"We will celebrate the Beaujolais Nouveau on Skype with our Japanese clients," said Claire Chasselay, 30, a wine producer in Chatillon d'Azergues, in southern Beaujolais.

Exports account for around 40 percent of sales of the "primeur" wine, which has a powerful marketing pull even if the taste often leaves critics unimpressed.

"Our Japanese clients know us thanks to Beaujolais Nouveau. Now they buy our line throughout the year," said Chasselay.

A note to would-be connoisseurs: Never ask what taste Beaujolais Nouveau will have this year.

"And this year's pizza — what taste will that have?" fires back Chasselay when asked.

"There are 2,000 producers in Beaujolais, all small operations, who all make their wine differently."

Beaujolais Nouveau has a reputation for a very fruity aroma.

In the days when it was mass produced with little care for the quality, it was derisively known as the banana-flavoured wine.

"[Banana] is an aroma that can be found naturally in wine," said Melina Condy, another producer. "But for Beaujolais, it was due to a yeast that was added that had a secondary effect on the taste. It is no longer used."

For some, making the wine is a great challenge.

Getting it right though is tough.

"It's the most difficult, but it's so much fun to do," said Fabien. "If you finish the process too soon or too late, there is no maturity to fall back on. That's why so much ends up in the trash."

Regardless of the risks, the release of the Beaujolais Nouveau has become a fixture of restaurants all over the world.

From New York to Beijing, fans will celebrate the tradition invented by wine dealer George Duboeuf in 1967.

Some of the most dedicated fans will even travel all the way to Beaujeu, heartland of the region, where thousands of enthusiasts from Japan, America and Europe descend every year.