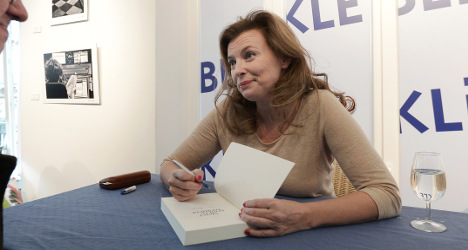 Valérie Trierweiler will break her silence on her book about François Hollande when she visits the UK this week. Photo: Frederick Florin/AFP

Having declined to do any press publicity for her book "Thank You for the Moment" (Merci pour le Moment) in France, which details her relationship with Hollande and their break-up, Trierweiler will instead speak about it publicly for the first time to the British public.

The former unofficial first lady, who was unceremoniously dumped by Hollande after details of his affair with actress Julie Gayet were revealed, will give an interview to the BBC's flagship current affairs programme Newsnight and will be a guest on the channel's Andrew Marr Show.

She will also give an interview to The Times newspaper.

Trierweiler, the former political correspondent for Paris Match magazine, was not well known in Britain before Hollande became president in May 2012.

But the dramatic end to her relationship with Hollande and the release of her tell-all book has ensured that she is now a well-known face in the UK.

"There is a real curiosity about her abroad. Valérie will be in London, then we are planning trips to Rome and Madrid. And why not, one day, to the US," her literary agent Anna Jarota was quoted in Le Figaro newspaper as saying.

After publishing her book Trierweiler was panned by critics in France, most of whom thought she overstepped the mark and broke an unwritten rule of French politics, by discussing the private life of the president.

She however went on holiday after the book's release and has since kept a fairly low profile.

However Jarota says the reaction from the French people has contrasted to that of the media.

“Valérie is especially happy to have public support. In all the bookshops she has appeared at the reaction has been excellent. There's a difference between the harsh comments made by the French press and the respect and encouragement she has received there," she said.

Having now sold 600,000 copies in France, 10,000 copies of the English version of Trierweiler's book have been pre-ordered online ahead of its release. It has been translated into eleven languages, including Italian, Chinese, Polish, Albanian and Vietnamese, with the paperback edition coming out in spring 2015 – to which Trierweiler plans to add previously unseen material.

However, the book's editor Laurent Beccaria at publisher Arenas has stated emphatically: “There will be no Volume Two.”