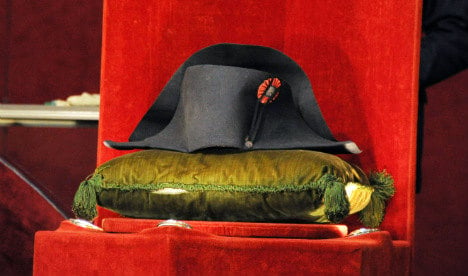 A Korean chicken mogul has bought Napoleon's hat for its "spirit". Photo: AFP

The self-made South Korean chicken mogul who bought a hat worn by Napoleon for $2.2 million said on Tuesday that he saw the French emperor as a mentor and kindred spirit, and would have happily paid more.

"I can understand and relate to many passages of his life," Kim Hong-Kuk, the 57-year-old founder and chairman of the poultry giant Harim Group, told AFP.

"I've always thought there were certain similarities between him and me in terms of thinking and decision-making, though I'm nowhere near being as great as Napoleon."

The chairman of South Korea's top poultry processing firm shelled out nearly €1.9 million for one of Napoleon's famous two-pointed hats at an auction in Paris on Sunday.

Kim started in business as a teenager with around a dozen chickens and built a conglomerate with additional interests in pork processing, animal feed and retail that posted annual sales of 4.8 trillion won ($4.4 billion) last year.

"Napoleon struggled a lot when he was young and trying to be successful but never gave up," said Kim.

"For years I've admired his challenging spirit that nothing is impossible."

Kim paid almost five times the estimated value of the hat as the price was driven up by competition with a Japanese bidder. But he said he would have been willing to pay even more to secure what he described as a "priceless" artifact.

"When people think of Napoleon, the first thing that pops into your mind is his hat," he said.

The beaver fur "bicorne" was one of only 19 known examples left of the emperor's iconic headwear.

Kim purchased another seven items at the two-day auction of Napoleon memorabilia by Monaco's royal family, including several swords and portraits.

"Napoleon had this sense of optimism even in the most trying circumstances and was also a very meticulous leader, something all entrepreneurs including myself should learn from," Kim said.

Napoleon has long been a popular historical figure in South Korea where his best known quote is: "Impossible is a word found only in the dictionary of fools."

It is an epigram that resonates in a country that takes huge pride in its rapid transformation from a war-torn backwater to Asia's fourth-largest economy. Kim said he had been bombarded with calls from people hoping to see the hat, adding that it would be put on public display to share Napoleon's "spirit of challenge and adventure".

Kim said he had already received an offer to buy the hat at a 30 percent mark-up from Sunday's price, but had no intention of selling.

"Some people say I am squandering money on trivial stuff," he said. "It may not be worth a penny for those who don't know the value of Napoleon's spirit but for me, it's priceless."