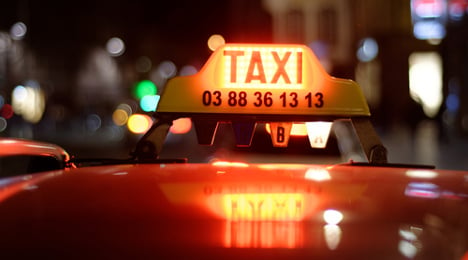 The woman claims a taxi driver threw an object at her head when she attempted to get into the Uber vehicle. A French taxi: Shutterstock

The business school student said she had spent the night out celebrating her birthday in the northern town of Lille, when she on October 11 decided to order a ride home to the nearby town of Roubaix via the chauffeured car hire app UberPop.

When the Uber vehicle showed up at around 3:30 am, the woman said that a group of taxi drivers began insulting her and her friends, saying Uber was illegal and preventing them from getting into the car.

The woman and her friends then went in search of another Uber vehicle which was once again allegedly blocked by the rival taxi drivers.

When the group eventually located a third Uber car, the situation suddenly turned violent, she said.

The woman told Europe1 that as she was trying to get into the car she turned around and saw a taxi driver yell and throw an object toward her, most likely a bottle.

“It hit my head and then I found myself on the ground,” she told Europe1. “There was blood dripping. That’s when I started to panic.”

The woman, who suffered a head injury from the impact, reported the incident to the police.

“We are students, we don’t have the luxury of being able to take a taxi because we can’t afford to,” the young woman was quoted as saying. “If you want to go out, you take the less expensive solution. Here it’s Uber.”

Uber launched UberPop in Paris in February this year, and billed it as a ride-sharing service that allows almost any individual to become a part time taxi driver and pick up others in their own cars.

In October a Paris Criminal Court fined Uber €100,000 for "deceptive business practices" because the firm was selling its paid transportation service UberPOP as a carpooling service.

The unions CGT-Cheminots and SUD-Rail called for more walkouts in protest against the government’s planned pension reform.

According to France’s national rail service, SNCF, the strike action will lead to a delays and cancellations, with an average of two in three high-speed TGV trains continuing to run according to normal operating schedules. High-speed train operations in the east of the country will operate almost normally.

The budget train operator Ouigo will also be affected, with two out of every three trains running on Wednesday.

The strike will also limit TER regional services to one in every two trains running, according to Franceinfo.

The SNCF website on Tuesday recommended that those who can cancel or postpone trips on Wednesday do so. If you believe your travel plans might be impacted by strike action, you can find more information at the SNCF website here.

As for the Paris region, normal services are expected on the RER A and B on Wednesday. The RER E will run two trains out of three, and half of RER C trains will run. The RER D will only have two in five trains running, and connection between Châtelet-les-Halles and Paris Gare de Lyon will be suspended.

Transilien operations may be disrupted, with the P and U lines running three out of four trains on average. Lines H, J and L will run two trains out of three. Half of the line N trains will run. Line R will run one train out of every five.

Intercité nighttime operations will not run, and daytime ones will see half of trains operational.

International traffic may be disrupted on Wednesday as well. The Eurostar is expected to operate normally, and Thalys will be slightly disrupted. However, Lyria will run three out of five trains.

Rail workers will not be the only ones continuing to strike on Wednesday. Oil refinery workers had already announced their intention to continue their 72-hour industrial action into February 8th.

You can keep up to date regarding strike action in France here.