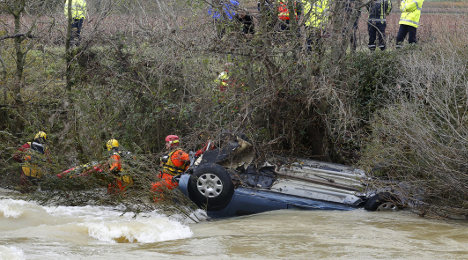 A car which was swept away by an overflooded river near Cruviers-Lascours, southern France, in an accident that killed a mother and her two children. Photo: Boris Horvat/AFP

On Saturday a mother was killed along with her two sons, aged four and one, after their car was lodged on a bridge submerged by water and swept away in the Gard department in southern France.

The father, who was also travelling in the car, survived the ordeal after rescue workers managed to pull him out of the vehicle just before it was swept away by the floods caused by the torrential rain.

The father was taken to hospital in a state of shock.

Further north in the same department, another vehicle was carried away in similar circumstances, killing a man in his fifties, according to local officials.

A retired man in the neighbouring Lozère department died late on Friday, apparently swept away as he was driving on a flooded mountain road. His body was found in his car more than 20 metres (yards) below on Saturday morning.

Storms were also reported on the Swiss-Italian border where at least four people were killed as landslides triggered by torrential rain slammed into buildings.

In the rain-drenched southern Ticino region of Switzerland, two people died and one was critically injured when a mudslide slammed into a small residential building.

On the other side of the border, a pensioner and his granddaughter were killed when another landslide engulfed a house on the Italian shores of Lake Maggiore. Three other family members survived.