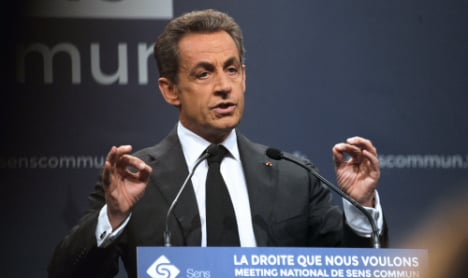 Waging a closely-watched political comeback, Sarkozy made his strongest comments yet against the law during a debate with two rival candidates vying to lead the centre-right UMP into the 2017 presidential election.

The same-sex marriage law, which came into force in May 2013 and also legalizes gay adoption, "should be rewritten from the ground up," Sarkozy told audience members on Saturday.

His words were met with jeers and chants of "Repeal! Repeal!", prompting the former president to add: "If you prefer that I say repeal the law… it comes down to the same thing."

He added: "There is no point in opposing surrogacy if we don't repeal the Taubira law", referring to Justice Minister Christine Taubira who passionately backed the same-sex marriage act.

Hollande, in Brisbane for the G20 summit, refused to comment on "a political party's internal campaigns".

However he told a press conference that the gay marriage law — the flagship reform of his deeply unpopular presidency — was being "applied without friction, including by mayors who may have had doubts or questions".

"Every day it is being better understood," he said of the law which prompted mass protests and a deeply divisive debate in the secular but overwhelmingly Catholic country.

After he was elected in 2007 Sarkozy promised gay voters he would introduce civil unions, but nothing came of it during his term.

According to an Ifop poll published Saturday, 68 percent of the French were in favour of same-sex unions, and 53 percent supported adoption by homosexual couples.

Caroline Mecary, a specialist in gay rights, told AFP it would be impossible to go back on the law.

"Sure, on the political front one parliament can always undo what another parliament did," she said.

However a situation where some gay couples were already married or had adopted children, and others were no longer allowed to, would create a "real legal problem which would not stand up at the level of the constitutional council".

"Nicholas Sarkozy is a lawyer, he knows all that."