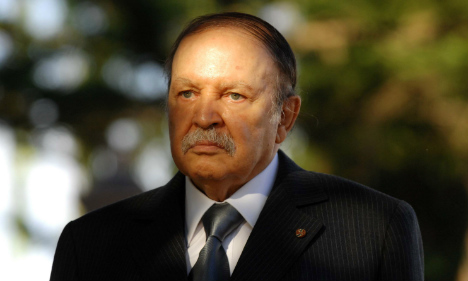 The clinic in the southern city of Grenoble did not offer a reason for the hospitalization nor give an update on his condition.

The Algerian presidency did not confirm the report but said it would release a statement later on Friday. Bouteflika has hardly been seen in public since his re-election in April.

According to the regional newspaper Le Dauphine Libere, Bouteflika was admitted in the cardiology unit of a private clinic called the Alembert. It said the entire floor had been booked to ensure security.

About 35 anti-riot police were deployed in and around the hospital and cordoned off the street.

Bouteflika is a war veteran who became Algeria's youngest minister at the age of 25 and has ruled the country since 1999.

He has not openly named a successor and his health woes have sparked concern about who will replace him if he cannot complete his term as leader of an energy-rich country that is a key ally in the fight against Islamist groups in the region.

Bouteflika spent 80 days being treated in Paris for the mini-stroke in 2013. He returned to Algiers looking frail in a wheelchair in July of that year and was not seen in public for months. He travelled back to Paris for more minor treatments in January.

That did not stop him standing for election for a fourth time in April, winning with more than 80 percent of the vote. The opposition refused to recognise the result.

He has been seen only on rare occasions since. In a break from tradition, he failed to appear in public for Eid al-Adha prayers marking the end of the annual hajj pilgrimage to Mecca last month.

On November 1st, he made another appearance, visiting a cemetery housing the remains of Algeria's independence war heroes in an Algiers suburb. He came in a wheelchair.

One of the few surviving veterans of the war of independence against France, Bouteflika came to power after helping to end the country's devastating civil war in the 1990s.

Amendments to the constitution in 2008 cleared the way for him to run indefinitely. He has since taken steps to prevent future presidents from holding the presidency for more than two terms.

In addition to health concerns, his rule has been dogged in recent years by corruption scandals implicating members of his inner circle.

However, Bouteflika remains popular, being credited with helping to end a devastating civil war in the 1990s and contain Arab Spring protests in 2011.

When the Arab Spring erupted in January 2011, Algeria witnessed deadly unrest. A month later, Bouteflika met an opposition demand and lifted a 19-year state of emergency.