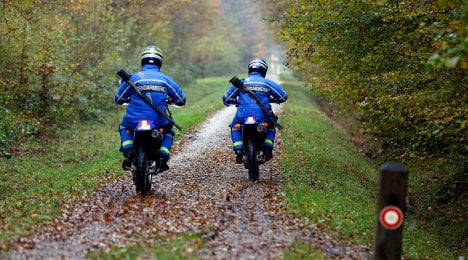 French gendarmes take part in the ongoing search for what was first described as a tiger on the loose, in the woods of Ferrieres-en-Brie near Paris. Photo: Thomas Samson/AFP

Sightings of a large feline padding around wooded areas only 40 kilometres (25 miles) east of Paris on Thursday sparked a desperate search operation involving at one point as many as 200 police and soldiers, backed by a helicopter.

Authorities initially claimed it was a tiger but subsequent investigations on the animal's tracks showed it was probably much less dangerous.

Experts from the national hunting and wildlife office and a nearby big cat park said: "We can exclude the presence of an animal from the tiger species."They added though that "the feline is still being hunted".

An official source told AFP that the search had been scaled back for the moment and the helicopter grounded although forces remained "mobilised" in case of a fresh alert.

The story generated wall-to-wall coverage in France on rolling news channels. Local paper Le Parisien splashed a picture of the animal on its front page with the headline: "The unbelievable tiger alert."

But the threat level was downgraded on Friday, with the local director of public safety, Chantal Baccanini, saying there was "no danger for the general population".

"It's between a domestic cat and a bigger feline," said Eric Hansen from the national hunting and wildlife office ONCFS.

The mayor of the town of Montevrain, where the animal was first spotted on Thursday, estimated that the animal weighed around 70 kilogrammes (150 pounds).

But Hansen said it was likely to be about half this weight and probably "not dangerous".

Despite deploying around 100 police, firefighters and soldiers immediately after the sightings, the search proved fruitless. Torrential rain hampered the scaled-down hunt later Friday.

A footprint, initially thought to be that of a tiger, was spotted early Friday morning at the unlikely location of a service station near the A4 motorway.

France's traffic centre also said a "stray animal" had been spotted nearby and urged motorists to exercise caution on the motorway.

Tiger or no tiger, Montevrain resident Jean-Francois Ameur was taking no chances as he told his 12-year-old son to wait for a neighbour to pick him up from school in a car.

Meanwhile, officials were still scratching their heads as to where the feline could have come from.

A local woman sounded the alarm early on Thursday morning after spotting the animal in the supermarket car park.

Several more people later came forward saying they had seen a "tiger" on the prowl.

"It's becoming hysteria. That was to be expected," said a police source.

More than 100 police officers and firefighters armed with tranquilizer guns had spent Thursday combing the area in the Seine-et-Marne district to the east of the French capital.

A dog trained in tracking bears and large game was even brought in to help with the search.

Authorities defended their response, which included ordering citizens to stay indoors and posting police at schools.

"We were talking about a tiger. This is an animal that is potentially extremely dangerous. Our mission is to measure the response in relation to the potential risk," said Frederic Mac Kain, a top official from the nearby town of Torcy.