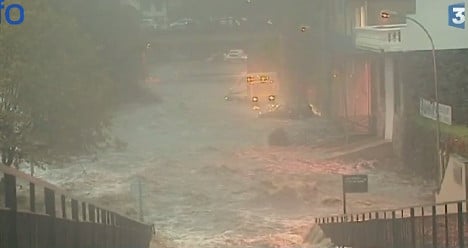 By late morning on Friday, a light rain had begun to fall on the coast of Var. This was expected to extend to Bouches-du-Rhône, Vaucluse, elsewhere within the Var and to the Alpes-Maritimes coast by the afternoon, and to increase in all these areas by the early evening, becoming stormy by Friday night.

In Vaucluse and Bouches-du-Rhône, 60-80mm is expected to fall, with the rain beginning to clear by Saturday morning, while in Var and Alpes-Maritimes, where rainfall is expected to reach 120-180mm, it will continue into the afternoon. The episode of severe weather is expected to be over by 6pm on Saturday in all areas.

Météo France has placed 21 other departments across the south-east and north-east under yellow alert. Last week some fifteen departments in south-eastern France were on alert as storms swept through the region. Residents in the Ardèche were some of the hardest hit as rivers burst their banks, leaving 6,000 homes without power. Firefighters were called out to deal with almost 100 incidents.