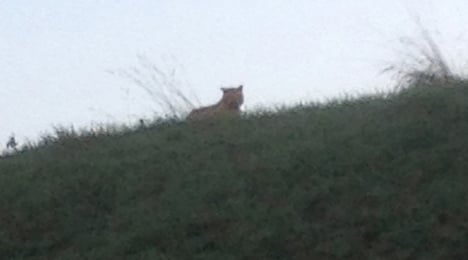 A picture taken by a passerby shows a tiger on the loose walking in Montevrain, east of Paris, on Thursday, 13th November. Photo: Julie Berdeaux/AFP

Around a dozen soldiers from a nearby army base prepared to join scores of French police in the hunt for the animal, which has eluded all attempts at capture since being spotted prowling around a supermarket car park on Thursday morning, and police guarded the entrance to schools as children arrived on Friday morning.

A chopper equipped with thermal imaging equipment circled over the search zone – a wooded area near the small town of Montevrain, some 40 kilometres (25 miles) east of Paris – after a "tiger footprint" was spotted at the unlikely location of a service station near the A4 motorway.

A police source said a specialist had confirmed the print and that, if it were confirmed to be the tiger, the animal "would have had to cross the motorway." France's traffic centre also said a "stray animal" had been spotted and urged motorists to exercise caution on the motorway.

Meanwhile, authorities were still scratching their heads as to where the tiger could have come from. Montevrain is a stone's throw from the Disneyland Paris resort but owners insist that tigers are not among the theme park's attractions. Authorities have also made enquiries at a big-cat wildlife park 30 kilometres away.

SEE ALSO: The five most dangerous animals in France Suspicion initially fell on a circus that had set up its big top in the supermarket car park a few days ago, but town mayor Christian Robache said it "did not have a tiger".

A local woman sounded the alarm early on Thursday morning after spotting the animal in the supermarket car park. Several more people later came forward saying they had seen the tiger on the prowl.

More than 100 police officers and firefighters armed with tranquillising guns spent the day combing the area in the Seine-et-Marne district near the French capital, without success.

One Town Hall official told The Local on Thursday afternoon that locals "were beginning to feel a little scared" given the wild cat had not been found yet. Authorities have ordered residents to stay indoors and use cars to pick their children up from school. Town hall official Cedric Tartaud-Gineste told AFP: "We are calling on residents to be careful, not to leave their homes and to stay in their vehicles. Anyone who sees the tiger should call the police or the fire service."

He said that a security cordon covering an area about the size of four or five football pitches had been set up around a wooded area near the small town of Montevrain, some 40 kilometres (25 miles) east of Paris.

Cedric Tartaud-Gineste from Montevrain told The Local on Thursday officials were certain they were hunting a tiger. "It's been clearly identified," he said. "It has orange and black stripes".
"There is no doubt, it's a tiger," echoed Robert Picaud, the head of a local group responsible for regulating pests, and who took part in the search. "The footprints are real and they were not made by a man. These prints and photos leave no room for doubt."
Police were also using thermal cameras in a bid to find the big cat, estimated to weigh around 70 kilogrammes (155 pounds), according to Robache. A dog trained in tracking bears and large game was also brought in to help with the search effort.

As darkness fell on Thursday, officials suspended the search until daybreak. The helicopter with thermal imaging continued through the night but "the search proved fruitless," a police source told AFP.

Authorities have said they hope to catch the tiger alive. "If it's possible, we'll try and put it to sleep. If it becomes dangerous or aggressive, the order will be given to kill it," police said.

A source close to the search operation said the hunt for any tiger would be made more difficult because if the big cat behaved in typical fashion it would nap a lot, possibly spending hours unnoticed sleeping in a tree.

The PETA animal rights group called on authorities to "show restraint and compassion in dealing with this tiger on the loose".

"This situation, however upsetting, is entirely preventable and should serve as a wake-up call to the public about the perils of keeping wild animals in captivity," the group told AFP in a statement.

What to do if you encounter the tiger

Circus master Frederic Edelstein of Pinder Circus has some advice in case you do encounter the tiger: arm yourself with a German dictionary.

He told radio station RTL: "The most likely hypothesis is that the tiger is an animal illegally owned by an individual" since no circus circus or zoo has reported the disappearance of an animal – French law requires the possession of a certificate of competency issued by the Ministry of the Environment for keeping non-domestic animals.

“The advantage of being human is being vertical and having a voice,” Mr Edelstein said. He advises that when faced with a tiger the best thing to do is not to run, but to face it and scream and shout at it.

He also revealed that besides English, German was the most widely used language in circuses due to how it sounds: "German is much more guttural and its intonation more suitable, with short syllables. It's more appropriate for getting what you want.”