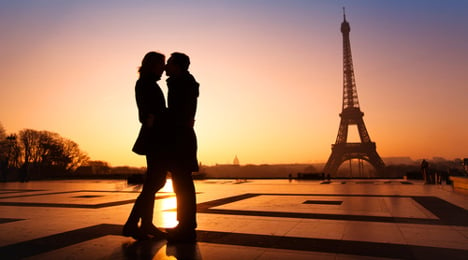 Is Paris really a city full of lovers? Photo of lovers in front of the Eiffel Tower: Shutterstock

So much has been written about Paris by outsiders, from Fitzgerald and Hemingway to today's digital cottage industry of blogs and Instagram accounts supplying an endless stream of Pierre Hermé macarons and chic apartments, that the city has become cultural shorthand for style, romance and basically the pinnacle of human existence.

This fetishisation is unique to France and its capital (when was the last time you saw a book on unleashing your inner Belgian or how to dress like an Austrian?), and has even spawned its own psychological condition. Those afflicted with Paris Syndrome are said to be suffering the shattered dreams that inevitably result from overexposure to clichés prior to their arrival in the City of Light.

Three months in, and so far thankfully symptom-free, here's what I have found to be fact and fiction.

Instructing lesser mortals in Parisian sartorial savoir-faire is a viable career plan and a book deal-in-waiting these days for just about any French girl with a decent grasp of the supposed basics – bedhead hair, ankle boots and ballet flats, a trench coat, red lipstick and a wardrobe of scarves. But as far as I can see everyone here wears jeans, Nikes and a puffa jacket.

Parisians are not immune to the global dominance of sportswear or the rise of the Normcore trend that has seen adherents oh so fashionably reject the trappings of fashion in favour of the delights of North Face.

Although my flatmate does seem to be the exception to this: “But Benoit, everyone wears trainers.” *sniff* “They will regret this.”

I have a friend who, planning her impending visit, declared she'd need to buy a whole new wardrobe in the UK just to come here, and asked me with concern what I wore in Paris. My answer? Exactly what I wear in the UK, other than maybe sweatpants in public.

Unless they've started selling postcards of La Défense, not the last time I checked. It's not all Haussmann and wrought iron balconies, and this is no bad thing. There is a huge variety of architectural styles in Paris, from the aforementioned sweeping boulevards to the almost claustrophobic quaint streets of the Île Saint-Louis to more modern offerings – not all of them well received by locals.

The contrast of concrete with honeyed sandstone is what makes the city more than a museum. The Local office on the banks of the Bassin de la Villette in the 19th is surrounded by a mishmash of modern blocks and there's a modernist 1960s apartment building on the Rue de Sèvres with amber glass balconies which I would kill to live in, and not just because it's across the street from Le Bon Marché. “The Métro is basically Hades”

I am yet to have anything stolen, or even to be hassled, and I ride the Métro every day, most nights, usually alone, and usually doing something that involves my iPhone. So maybe don't count wads of cash in the middle of the carriage while consulting a giant map with the other hand, but use your common sense and you should emerge unscathed. “Parisians are all so rude”

This has to be the biggest misconception about the city, as the reality is actually the complete opposite of the much-peddled myth. Perhaps the thing that delights me most about living in Paris is la politesse – which is so ingrained in French culture that it only highlights the lack of it back in the UK (although, disclaimer, I am from Edinburgh, where we are not known for our warmth, in both senses of the word).

In Paris it would be unthinkable not to greet everyone from the woman selling you a stamp to the person you are sharing a lift with to the people in the doctor's waiting room and equally to wish them a bonne journée/soirée upon taking your leave. And I can almost guarantee that those who have experienced rude behaviour have failed to do this, which is merely evidence of how important manners are here, not of the lack of them.

Furthermore, my French is still a little tentative and nobody minds at all. I would add that Parisians actually seem less miserable to me than inhabitants of other major cities (ahem, London) – people still seem to take the time to enjoy life here. Contrary to popular belief a smile goes a long way too.

OK, yes, it is – but more than any other city I've lived in the very nature of Paris makes it somewhere you can enjoy life even when you're down on your luck. George Orwell managed it, after all. It's not all hanging out in Hotel Costes after a day of clearing out Colette and taking tea at Ladurée.

Picking up a book from a bouquiniste on the banks of the Seine and a baguette from any boulangerie and heading to one of the city's million public gardens will set you back a grand total of about €3. The city's holy trinity of tourist attractions – the Eiffel Tower, Sacré Coeur and Notre Dame – are all free, as are all the City of Paris-run museums.

Even window shopping in Paris is fun, with the extravagant displays in the grands magasins blurring the line between art installation and visual merchandising, and the café culture means nursing the same coffee for an hour is nothing to be ashamed of. Every young person I have met speaks English with a carefully cultivated American accent, even managing to nail the Valley Girl intonation. In fact, they are at pains not to sound British, which is deemed old-fashioned.

They love American music (the more vapid the better as far as my flatmates are concerned – major Selena Gomez fans) and movies; diners have sprung up all over the city in the last couple of years, while France is McDo's biggest market outside the US.

I am constantly asked if I am American (blonde hair, backpack and statistical probability) and, while my national pride swells every time the news that I am in fact une écossaise is greeted with delight, there is no hint of derision in the original question and I doubt answering yes to it would go down any worse than no.

“Paris is for lovers”

On the contrary, Paris is for single people, whatever the movies say. If the romantic yarn they spun were actually real, it could get pretty lonely being surrounded by people being swept off their feet left, right and centre. Luckily though, the reality is that around 51 percent of the city's inhabitants are single, which is far higher than the average in the rest of France and the average size of the Parisian household is less than two.

Here I see people dining alone, sitting at cafés alone and visiting museums alone far more often than I do in the UK. And those couples canoodling on the Pont des Arts with their loathed love locks and the brides queuing to have their photos taken at Trocadéro? All tourists.

Surprisingly enough, the French capital might just be the place you learn not to judge on appearance alone, at least when it comes to the male of the Parisian species. The bathroom of the first flat I stayed in here, with two male flatmates, contained roughly €2,000 of moisturizer and three hairdryers, and on my first night I was offered a DVD of the Yves Saint Laurent biopic to watch. I was somewhat surprised then to discover that both the boys, one of whom wore the same perfume I did while the other coordinated his umbrellas with his outfits, had girlfriends. I shouldn't have been – they're just Parisian.