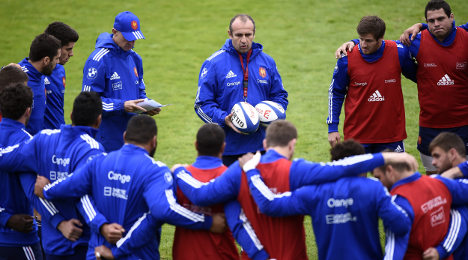 France lost all three test matches against the Wallabies on their June tour, twice being humbled by thorough thrashings, including one in which they conceded seven tries in a 50-23 rout in Brisbane, in which they only managed to garner a measure of respectability after scoring two late tries.

Les Bleus also lost 39-13 in Sydney, while their 6-0 defeat in Melbourne in a dire match which saw 53 scoreless minutes before a couple of Wallaby penalties, was another embarrassment.

But Hooper believes they will be a different proposition on home turf at the Stade de France.

"We know that the French will be a completely different outfit from the June series," said the captain – who is openside flanker for Super XV champions the Waratahs.

"We're excited to come here, we had the pleasure of playing them in our own backyard and now we've got to come over and do it here playing in this magnificent stadium and magnificent place in Paris.

"We're looking forward to it being a really tough battle because, to be honest, that's what the team needs."

He also expects Philippe Saint-Andre's side to continue to play the free-flowing, running rugby they produced in last weekend's 40-15 victory over Fiji in Marseille.

"We expect them to be open; the French show you many different things," added the 23-year-old.

"You've got to be prepared for that, you've got to adapt on the field and something the French do is they do play a great expansive game. They're great with their offloads, they've got big ball carriers and are solid in defence, and we've got to try to minimise that.

"It's going to be tough to do because here in their backyard when the fans get cheering, they really get their tails up."

As for his own team, Hooper said they would not be quite as gung-ho as in their last two matches – a 40-36 win over the Barbarians at Twickenham and a 33-28 success against Wales in Cardiff. They scored nine tries and conceded as many over the two games.

"It's not the best way to do it, it makes it very stressful in a game. Probably our focus on from last week [against Wales] is you want to be able to score points and then exit well and put the pressure straight back on them.

"That's something we didn't do well last week and it ended up coming back down to the wire. For us it will be about getting points and taking pressure straight off our back when receiving the kick."

One of the players who impressed for France against Fiji was South African-born full-back Scott Spedding, who created two tries on his debut.

But Hooper admitted that is a name which is new to his team.

"Obviously we've seen what he did against Fiji so it's in the front of our minds how he can play," said Hooper.

"It's tough to face guys who are in really good form, so for us its something we've got to keep an eye out on."

But it is the French old guard that most concerns the Wallaby captain.

"Across their back line – [Wesley] Fofana, [Yoann] Huget – they're all really solid, devastating players when they're on and they've got a really big forward pack.

"Our forward pack's going to be tested over the course of this trip and it's something we've got to be ready for tomorrow [Saturday] night because it starts here and we know we've got a big battle ahead."