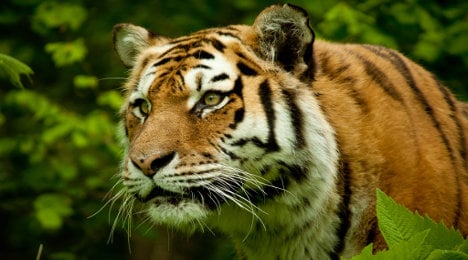 Police and helicopter crews are trying to track down an escaped tiger (not the one above) in northern France. File photo of a tiger: Shutterstock

The alarm was raised earlier this morning after a local resident in the small town of Montevrain, some 40 kilometres (25 miles) east of Paris spotted the animal and took a photograph.

Police, helicopter teams and specialist firefighters armed with tranquiliser guns were called out to deal with the animal.

Authorities have ordered residents to stay inside and children were kept at school, as several people came forward saying they had seen the tiger on the prowl.

One Town Hall official told The Local on Thursday afternoon that locals "were beginning to feel a little scared" given the wild cat had not been found yet.

Cedric Tartaud-Gineste from Montevrain told The Local on Thursday officials were certain they were hunting a tiger. "It's been clearly identified," he said. "It has orange and black stripes".

"Someone sent us a photo and from that moment we launched the security procedures as soon as possible," he said.

Experts from a nearby animal park were sent to the scene and believe the animal on the loose is an "adolescent" tiger.

The official said that a security perimetre covering an area about the size of four or five football pitches had been set up around a wooded area near the small town of Montevrain and that a careful but calm search was underway to locate the tiger.

Around 60 firefighters and police officers have been deployed in the search, as well as a dog trained in tracking bears and large game.

Police are also using thermal cameras in a bid to find the tiger, which is estimated to weigh in at 70 kilogrammes (155 pounds), according to the town's mayor Christian Robache.

Earlier Tartaud-Gineste told AFP: "We are calling on inhabitants to be careful, not to leave their houses and to stay in their vehicles."

"Anyone who sees the tiger should call the police or the fire service," he added.

An AFP reporter on the scene saw a dozen or so fire engines and police vehicles lined up near the supermarket.

Authorities said they were hoping to catch the animal alive.

"If it's possible, we'll try and put it to sleep. If it becomes dangerous or aggressive, the order will be given to kill it," police said.

The alarm was initially raised when a local spotted the animal in a supermarket car park, took a photo and then alerted authorities.

"My wife saw it this morning," Jean-Baptiste Berdeaux, who manages the Intermarché supermarket, told AFP.

"She didn't get out of the car and called me to say 'I think I saw a lynx'," he said, adding that she took a photo of the animal and the couple then alerted police officers nearby.

Animal right's group Peta has urged French authorities to capture the animal in a humane manner and described it as a "ticking time bomb".

"PETA urges authorities to show restraint and compassion in dealing with this tiger on the loose," the group said in a statement to The Local. "Tigers who are relegated to prison-like cages in zoos and circuses are ticking time bombs.

"This situation, however upsetting, is entirely preventable and should serve as a wake-up call to the public about the perils of keeping wild animals in captivity," the group said.

"PETA will be calling on the courts to punish the people responsible for putting this animal and Parisians in harm's way."

It was not immediately clear where the animal had escaped from or who the owners are.

The town of Montevrain is a stone's throw away from the Disneyland Paris but a source close to the investigation said there was no link to the theme park.

One theory was that the animal may have escaped from a circus that was installed in the village last week, but that idea was dismissed by local officials.

"The circus left on Saturday and during the health inspection before the event, officials did not notice the presence of a tiger," the local mayor's office told Le Parisien newspaper.

Authorities have also made enquiries at a big-cat wildlife park 30 kilometres away but no missing tiger has yet been reported.

The newspaper also published an amateur photo of an animal they say is the escaped tiger, although at first glance it appears to look more like a house cat than a wild beast.