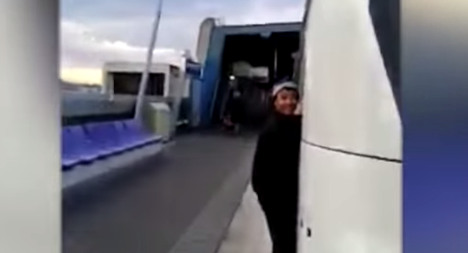 Rail chiefs in France are concerned that the craze, which is common in places like Russia, will take off in France.

It comes after two young men filmed themselves surfing an RER train through the suburbs of Paris and posted it to the web. The clip titled “RER surfing” has been viewed over 500,000 times.

The clip, which shows them clinging to the outside of the train, can be seen in the video below.

On hearing of the video, Paris transport chiefs at RATP immediately blasted the act and asked police to launch an investigation.

RATP condemned “with force” the behaviour of the two protagonists, saying the act was “dangerous, irresponsible and reprehensible”.

One of the suspected surfers was later arrested by police, sources told AFP.

The dangers of train surfing were seen in an incident in 2013 when a thrill seeker died while attempting to ride the Paris Metro.

During the journey one of two men clambered up on to the roof of the front carriage, but as he lifted himself up he was struck full force in the head as the train entered a tunnel before Montparnasse station.