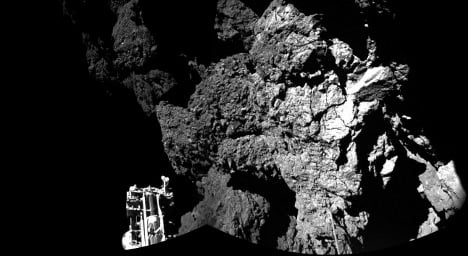 Some data suggested the washing machine-sized probe may have touched down three times on the low-gravity comet, which is zipping towards the Sun at 18 kilometres per second (11 miles per second), according to updates from ground control.

Philae's anchoring harpoons failed to deploy, but it still managed to send back scientific data for the European Space Agency (ESA) flagship mission as well as the first picture ever taken from the surface of a comet.

"Philae is working well. Its battery is working well and is providing power," mission head Philippe Gaudon of France's CNES space agency told AFP by phone from ground control in Toulouse on Thursday.

But photos the robot lab had sent suggested "it is likely on a steep slope".

"Short status update: we believe that Philae bounced (possibly 3 times) but sits safely on the comet now," said another at 0800 GMT.

Equipped with ten instruments, Philae is designed to carry out an array of experiments on Comet 67P/Churyumov-Gerasimenko.

It is the highlight of a massive €1.3 billion ($1.6 billion) project more than two decades in the making.

The mission aims to test theories that comets — primordial clusters of ice and dust — hold secrets about how the Solar System was constructed 4.6 billion years ago, and may also have seeded Earth with some of the ingredients for life.

Rosetta, carrying Philae, was hoisted into space in 2004, and took more than a decade to reach its target in August this year, having used the gravitational pull of Earth and Mars as slingshots to build up speed.

The first signal confirming touchdown was met with jubilation at ground control in Darmstadt, Germany.

But this was soon replaced by worry when fluctuations in the radio signal indicated the 100 kilogramme (220 pound) lander may have lifted off again.

"Philae spent the night on the comet and we have three pieces of good news: the first is that Philae has landed on the comet," he said on Europe 1 radio.

"Secondly, Philae is receiving energy, its solar panels are activated and this allows it to envisage a future. Thirdly, we are in permanent contact with Philae, via Rosetta."