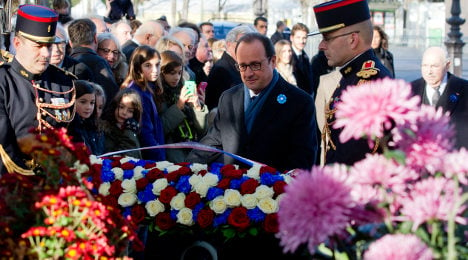 Across the Channel in London, a teenage army cadet planted the last of 888,246 ceramic poppies at the Tower of London, representing every British military fatality in the 1914-18 war that saw more than 16 million troops and civilians killed.

"Enemies yesterday, these men are now united in death as if they belonged to the same family," Hollande said at the Notre-Dame-de-Lorette military cemetery, on the day that marks the official end of the Great War and also wraps up a series of commemorative events for the centenary of the bloody conflict.

The French leader inaugurated the Ring of Remembrance memorial, where the names of soldiers from some 40 countries are engraved in white on 500 gold steel plates arranged in a 345-metre-round (1,132-feet-round) ellipse set in the green countryside next to the cemetery.

In a first for such a memorial, the names of 579,606 soldiers who fell in the area's battlefields are listed one after the other in alphabetical order regardless of nationality, origin or religion — allies and enemies alike.

These include more than 241,000 British soldiers, most of whom are buried in some 800 cemeteries in the region, over 173,800 Germans and 106,012 French, including fighters from former colonies such as Algeria and Senegal.

Memory 'not made for the past'

"Every time that nationalism re-emerges, that ideologies of hate resurface… we must remember the vicious cycle of the summer of 1914 and where it led humanity."

"Peace is always fragile, it can falter at any moment," he added.

"Peace needs activists, defenders and diplomats to look for compromises — and we need these in Ukraine, Syria and Iraq — but also soldiers to avoid the worst."

Security was high at the ceremony, but just hours before Hollande's speech a tourism plane piloted by an activist still managed to fly over the memorial pulling a black banner calling for the French president to resign.

The embattled French leader is deeply unpopular, as unemployment in the country keeps rising and growth grinds to a halt, but the flyover was widely condemned — coming as it did on Armistice Day.

"At a time of unity, in a moment of commemoration… I think that it is a foolish gesture," Veterans Minister Kader Arif told French television.

In Britain, meanwhile, people around the country stood for the traditional two-minute silence remembering all those who have given their lives in conflict.

And Cadet Harry Hayes, 13, was watched by thousands at the Tower of London as he completed the ceramic poppy installation Blood Swept Lands and Seas of Red.

The vast artwork, filling the moat surrounding the 11th-century fortress with a blood-red tide, has become the focal point for World War I centenary commemorations in Britain.

An estimated five million people have been to the castle to see the poppies — the symbol of remembrance — and in recent days, the floodlights have been kept on so people can visit through the night.

France, meanwhile, has been at the forefront of global events marking the centenary.

The country's annual Bastille Day military parade in Paris on 14th July was attended by soldiers from around 70 nations once involved in one way or another in World War I, including Britain, Japan and Germany.

And on 3rd August, Hollande and his German counterpart Joachim Gauck paid emotional tributes to the millions of soldiers who died, exactly 100 years after Germany declared hostilities against France.