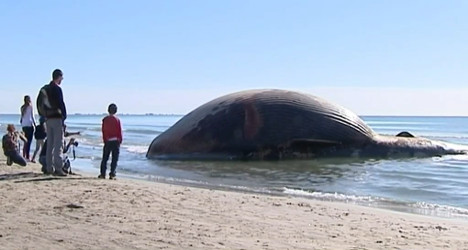 This whale washed up on a beach in France could explode. Photo: France 3

The whale washed up on the beach in early November at Saintes-Marie-de-la-Mer, near Montpellier on the Mediterranean coast, is already in a decayed state. It now needs to be moved quickly as gases inside the carcass could cause it to explode.

“Because of the heat, gases form inside the cadaver – hence, the bulging appearance of the whale – and accumulate until they explode,” Anaïs Cheiron, project manager of the national reserve of Camargue, told daily newspaper Midi Libre.

Local whale expert Jean-Baptiste Sénégas, explained that these mammals usually die after collisions with ships. He also took samples of the animal's skin, fat and muscles for analysis, and to complete data on the health of whales.

Authorities are looking into different ways of disposing of the animal, either via land or sea, favouring whichever approach proves to be “more practical and less risky”.

According to Cheiron, the whale could be dragged out to sea and detonated using dynamite, but boats are not able to get close enough to the shore to drag it out due to the presence of sand banks.

The other option would be cutting the 15 tonne animal into pieces and loading them on to a van with a crane to be removed and disposed of.

Meanwhile, road access to the whale has been blocked and the area around it closed off to prevent people from approaching or touching it.

A video from 2013 showing the explosion of a dead whale in the Faroe Islands demonstrates how someone approaching a dead whale carcass might be taking their life in their hands.