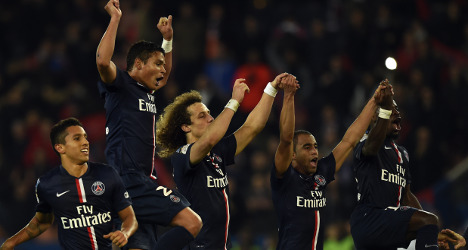 The two-time defending champions dominated their visitors from the south in an intense encounter and wrapped up three crucial points thanks to an opportunist strike from Brazilian Lucas Moura and a close-range header from Edinson Cavani.

PSG are now just one point behind Marseille as their unbeaten start to the season, in all competitions, continued in the biggest fixture in French football.

Lyon, who won their fifth straight match earlier in the day when they downed Guingamp 3-1 at the Stade Gerland, are also breathing down the necks of Marseille and stand two points adrift.

The match in the capital struggled to burst into life despite the return of PSG's Swedish star Zlatan Ibrahimovic who came on with 24 minutes left for his first action since September 21.

Marseille coach Marcelo Bielsa looked on in shock with the match 1-0 as his side's chances of an equaliser took a severe turn for the worse with 12 minutes left when Giannelli Imbula was shown a straight red card for what appeared to be a minor offence.

Cavani capped a convincing performance for PSG with a poacher's header from just outside the six-yard box with five minutes remaining that capped a perfect week for the capital club who also booked their place in the Champions League knockout phase.

"We played with a lot of intensity and it's a great victory which counts a lot for us," said PSG defender Maxwell.

"Zlatan played well when he came on and he gives us a different dimension. He's a very important player for us so it's good for him that's he's back but we're all looking forward to some rest now," added the 33-year-old Brazilian ahead of the international break.

Bielsa admitted the red card changed the momentum of the match.

"I think the result was justified," said Bielsa.

"We were on top for a while in the first half even if it was 1-0 for them and the second half was balanced until the red card which allowed PSG to get on top.

"There are six more matches left in the first half of the season and we have to get back to positive results in order to justify our position at the top."

Monaco held on for a 1-1 draw at Saint-Etienne despite finishing the match with ten men in a stormy encounter at the Geoffroy Guichard stadium.

Reims extended their unbeaten run to five matches with a 2-0 victory over Lille, who now haven't won in the league in five outings.

Alexandre Lacazette went top of the Ligue 1 scoring charts with 11 goals as he opened the scoring for Lyon in the eighth minute with a back post header from Nabil Fekir's cross.

Fekir doubled the lead on 20 minutes after converting on the slide a low cross from Christophe Jallet.

At that point Lyon seemed in cruise control but they needed Fekir's second goal, three minutes from time, to finally steady their nerves.

The Cup holders pulled a goal back on the stroke of halftime as Sylvain Marveaux's free-kick came back off the bar and hit Lyon goalkeeper Anthony Lopes before going in.

Under steady rain at Saint-Etienne, Lacina Traore saw his shot deflected past Stephane Ruffier to put Monaco 1-0 in front after just 17 minutes.

However Saint-Etienne, were handed the first of two dubious decisions on 58 minutes, when Dutchman Ricky van Wolfswinkel was allowed to run clear despite being blatantly offside and he gratefully tucked away the equaliser.

Monaco suffered more bad fortune when they were reduced to ten men with 19 minutes left when Tiemoue Bakayoko was shown a second yellow card for a light brush against a Saint-Etienne player that even had the home players appealing to the referee for leniency.

"We didn't create a lot of chances and we were lucky enough to take the lead but we weren't able to protect the advantage," said Monaco playmaker Jeremy Toulalan.

"We've being playing some good matches and we might have lost this one a while ago but it's a good draw and now we just have to push on and hope for better results."